Got a man of the people / Says keep hope alive

Neil Young / “Keep On Rockin’ in the Free World“

I check my StatCounter and Site Meter stats fairly regularly to see what keywords are leading people to my old blog here. Almost always, it’s song lyrics that lead people here. However, over the last several days I’ve noticed a lot of hits on my blog for the name “Ryan Means.” I immediately worried as to the exact reason why so many people were searching for his name; had something happened to him? I recognized Ryan’s name immediately because he reached out to me almost three years ago with regard to the 9/11 tribute post I wrote for Adam Shelby White, who died in the World Trade Center. You see, Adam was Ryan’s best friend, and Ryan e-mailed me to thank me for remembering his friend:

You somehow have chosen to honor my best friend Adam Shelby White who was murdered on 9/11. Adam was perhaps one of the greatest people I have ever known. We had been best friends since 1st grade; college roomates, fraternity brothers, climbing partners and a whole lot more. He was 27 years old when he died. Adam absolutely loved life and was always fun to be around. Everybody loved the guy. He wasn\’t very big but was incredibly talented and very intelligent. A true renaissance man; bigger than life itself.

I was there that day and watched the whole thing. In the weeks following I searched for him in the various hospitals and waited for him to be pulled out. During this time, I met many of the families and friends of other victims. It was brutal to walk the streets for days and see the massive walls of photos and information looking for the thousands of dead. I have ASW tattood in small letters on the right side of my torso to remind myse!lf of him every single day. Since then I have left my job and New York and joined the Army. I\’m 2 months away from graduating from the Special Forces and receiving my Green Beret. Afterwhich I\’ll be going to find the people responsible and do what I\’ve been trained. I do this for Adam and the other 2,993 vicitims.

Thank you for remembering my friend.

You can see what a special person Ryan was, in no small part because of how he chose to honor his late friend, as well as all the others lost that day. Which is why I was devastated this morning when my Google search for “Ryan Means” didn’t take me back to my own tribute to Adam as it had for the last few days, but instead pulled up his obituary: Ryan died last Tuesday, July 7, of cholangiocarcinoma. He was only 35. And even though he’s someone I hadn’t ever met and with whom I’d only exchanged a couple of e-mails, I had to hurry to the bathroom because I started crying. I cried because he was so young, because he leaves behind a wife and two young daughters, his parents, three brothers, and countless friends; and because it seems like such a cruel twist of fate that this brave young man, who risked his life defending our country, ultimately lost his life to cancer.

I encourage you to read more about Ryan Means on the website his family set up for his daughters, the Sophie and Elizabeth Education Fund. (His obituary has also been re-posted on some military message boards.) I think that this statement from his family says it all:

And if any of his family or friends read this, I want them to know I’m grieving right alongside with them. All because of two e-mails. 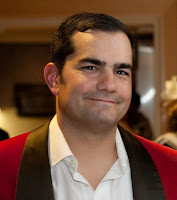