Coraline/Bedrest Update and a Belly Shot for Sharon in Virginia

I’m now on my tenth day of missing work. As of Friday’s followup appointment to my hospital stay, I’ve been cleared for light activities. As in, not doing much more than I was doing when I was on bedrest with bathroom privileges. I managed to do some laundry over the weekend which took me about 10 times longer than it normally does since I couldn’t just load the basket to capacity. Instead I made multiple trips with small piles of clothes from the hamper to the laundry room and made multiple trips with those small loads back to the bedroom when they were done. See how efficient I am? I got four loads done that way. Of course, half the clothes I washed are still neatly laid out in our bedroom, waiting to be folded or hung up and put away. Maybe I’ll take care of that later today. Baby steps and all with the light activity, you know.

I had another followup appointment yesterday (to the one on Friday — odd, right?) and today have ANOTHER appointment, this time back out at UT. Seems my OB found Coraline’s biophysical profile measurements a bit off and wants UT to recheck as they have much better ultrasound equipment. I of course started to panic, but Baby Doc reassured me that he just wants things rechecked; if there were cause for real concern, he would tell me, which I appreciate. My doctor friend also talked me off the ledge when I gave her an update last night. So I’m off to UT later today to get more detailed ultrasounds and another biophysical profile. I’ve had so many ultrasounds this pregnancy that we’ve lost count of how many photo printouts we have at this point. I think it’s somewhere around 40, 50. Maybe more. I just know it’s enough to warrant buying a small photo album just for Coraline’s ultrasound pics. Here’s one from yesterday. You know you’ve gotten alot of ultrasounds when they throw some 3-D ones in for free. 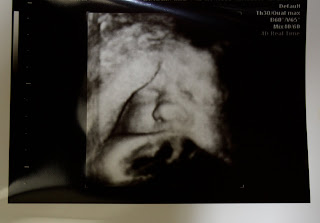 First time we’ve ever seen her with her hand in/pressed against her mouth.

And just for my friend, Sharon, in Virginia, here’s my latest belly shot. This is me at 34 weeks: 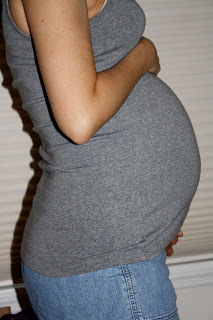 Thanks to Rich for taking my weekly belly shots.

And that’s what’s going on with me and the baby for now. Cross your fingers for me that today’s appointment finds Coraline healthy and happy. Well, we already know she’s happy on account of yesterday’s non-stress test. I’m pretty sure she was trying to karate-chop her way out. Baby girl is READY to be on the outside.

TiVo viewing for the last three days: four eps of Futurama, two and a half eps of Warehouse 13, half a Hex, 1 ep of Hung, 1 ep of The IT Crowd