Tim McGraw / “Down on the Farm“

Rich and I just took our first vacation since our “babymoon” to Denver and Breckenridge last February, our first as a family. We decided that since our last visit to his extended family was October 2007 and we now have Miss Baby, a visit was long overdue. So at the start of this month, we made arrangements for family members to house- and pet-sit, packed up Little Mo, and hit the road.

Our first day on the road, Saturday, was primarily spent driving to our determined halfway point: a hotel in Champaign, Ill. Seeing as how Coraline’s longest car trip at this point was the two-hour drive to and from Chattanooga the weekend before, we weren’t sure how well she’d handle being in the car. She ended up doing better than we expected, mostly sleeping, but fussing every now and then. If she got too fussy, we’d find a safe place to stop and stretch our legs, and whoever wasn’t driving that shift would hop in the backseat with her. By the time we got to our hotel, Rich and I were dead tired, and Coraline was raring to walk and explore. She — and we by extension — slept terribly that night. It was Coraline’s first time sleeping anywhere besides her crib in her room, we were in a strange place, and the crib was like a little jail cell on wheels with its cold, white metal bars. Oh, and I was paranoid about bed bugs (for naught, thank God), which also contributed to my lack of sleep. 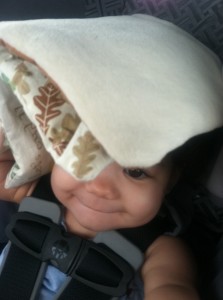 Sunday we drove to Des Moines, Ia., for the night. We checked into our hotel, which was about two blocks from Rich’s Uncle Gary’s house. We then headed to his house, where Gary cooked us a divine dinner and we hung out with him for a few hours. He was but the first of many relatives Coraline would meet that week. Then it was back to our hotel room — much, much smaller than the one the night before — and a night of lackluster sleep thanks to Coraline’s discomfort and the biker bar we didn’t know was around the corner until we got in bed and heard all the engines revving.

Monday morning we hit the road again, this time headed to Ames, Ia., to see Rich’s cousin Tom and his wife, Erin. From there, we followed Tom and Erin to Roland, Ia., to Tom’s parents’ house. Here not only did Coraline meet her Great-Uncle Dick and Great-Aunt Linda, she also met her second cousins (and Tom’s siblings) Pete, Nick, and Anna. We enjoyed a great cookout on their deck — built “like a brick shithouse” according to Uncle Dick — while Coraline enjoyed walking around and getting kisses from their dog, Tucker. The most meaningful visit this leg of our trip was seeing Rich’s Grandma Lee, Coraline’s great-grandmother, at her assisted living facility. Grandma Lee is now 97(!) years old, and unfortunately did not remember who I was. She did, however, remember who Rich was, and she’d been shown enough pictures of Coraline in association with Rich that she knew who she was. Coraline loved her Great-Grandma Lee, almost as much as she enjoyed walking into the main hallway and making friends with every resident and nurse who passed by. 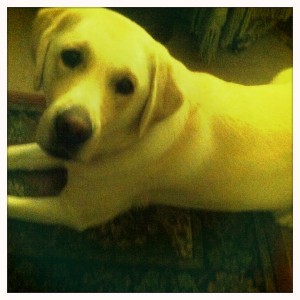 Tuesday morning we headed to Sioux Falls, S.D., to Rich’s cousin Jenny’s house. In addition to Jenny, Coraline met Jenny’s husband, Neil, and their kids Hope, Liam, Cameron, and Griffin for the first time. Coraline especially took to Griffin, 5, we think in large part due to the fact that he not only looks a lot like her cousin Elliott, but he has a lot of the same mannerisms as Elliott. And the same crazy energy, to boot. (I even accidentally called him Elliott a couple of times. Not that he noticed.) That night, in addition to a wonderful home-cooked meal prepared by Jenny and Neil, Jenny’s brothers Jason and Jaz came over, along with Taia, Jaz’s wife. Coraline did well other than crying a bit when she met Jason. To be fair, she’d just woken up from a nap and there were suddenly three new people in the house who weren’t there a few hours before.

Wednesday morning we packed up (yes, again) and headed for Alta, Ia., to Rich’s cousin Kurt and his wife Leah’s farm. Coraline got off to a bit of a shaky start with their 16-month-old, Hanna, but by the next morning both girls were getting along great (and Hanna was more willingly sharing her toys), with Coraline adoringly following her big third cousin around the house. Coraline also enjoyed meeting Marv, Kurt and Leah’s dog. Rich and I think she enjoyed having temporary pets on vacation since she loves our dogs and cats so much. Wednesday night we had dinner at Rich’s Aunt Diane and Uncle Bruce’s farm in Storm Lake, Ia. While there, Coraline got to meet her Great-Grandpa Edwards and her Great-Grandma Arlene for the first time; she also met Rich’s cousins Kyle, Kris, Kerry, Susan (Kerry’s wife), and Matthew (Kerry and Susan’s son). Leah and Hanna were also there. That night ended up being Coraline’s first really good night of sleep on our trip. 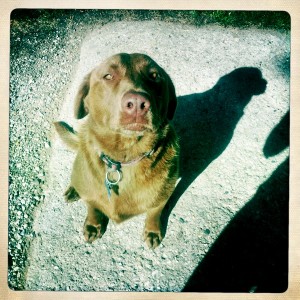 Thursday morning, we went with Grandpa Edwards and Grandma Arlene to a couple of nearby parks with Coraline, then enjoyed lunch with them at The Villager retaurant (I waited four years to have those onion rings again — totally worth the wait). Later that afternoon we packed up and headed to yet another relative’s house. Although we only packed up a fraction of our stuff as we were going to come back to Kurt and Leah’s house the next day. This time, we headed for Rich’s Aunt Janet and Uncle John’s house in Jackson, Minn. Which, while a beautiful area, is so in the middle of nowhere our cell phones didn’t work. Coraline enjoyed seeing Janet and John’s chickens, whose eggs Rich would enjoy for breakfast the next morning. We enjoyed yet another delicious, home-cooked meal (we were SO well-fed on this trip) that night. And, as I’d anticipated, as soon as Aunt Janet saw Coraline’s “operator” pose when bedtime rolled around, she exclaimed, “Carol!” — Coraline inherited that trait from her grandmother, Janet’s sister. Coraline had a hard time falling asleep that night, we think because it was the sixth straight night in a new location. Once she went down, though, she slept through the night.

Coraline passed out on Janet and John's couch Friday morning

Friday morning it was back to Alta, where Rich helped with the preparations for his Aunt Diane and Uncle Bruce’s 40th wedding anniversary celebration to be held that night in the farm’s Morton building. I did my best with baby wrangling, but Hanna was not having it — I fell firmly into the “stranger danger” zone as far as she was concerned. That night, a bunch of friends and relatives came to the farm to celebrate Diane and Bruce’s big night. We lucked out in that Rich’s Aunt Joan and Uncle Ed came from Des Moines, making it so we got to see them after all. Coraline handled meeting everyone like a little champ — she was practically a pro at this point. We enjoyed one last night with a lot of family members before hitting the hay. Saturday, it was up and on the road for our first day of driving home. We stopped at the same hotel in Champaign, where Coraline once again went nuts exploring. Turns out she has a fondness for playing on luggage carts — who knew? That night, Rich and I took her down to the pool, but she was so tired from being on the road all day she didn’t want to swim. Which worked out since a comically large, albeit not comically obnoxious, family was running amok in the pool area while we were there. So it was back to our room for the night, the last one before we would be back in our own beds at home. As it is, I ended up holed up in the bathroom blogging so I wouldn’t keep Rich and Coraline up while I wrote my 9/11 10th anniversary post.

Sunday’s drive was nice, uneventful, and long. About an hour before we got home, Rich and I had basically become delirious and were making weird, off-color, and just flat-out bizarre jokes about anything and everything. We could not get home fast enough at that point. Once home, Coraline seemed to rejoice in seeing her pets and toys again, although she had a hard time falling asleep that night, probably because it was a big deal to re-acclimate to her own crib and room again. Rich and I, however, did not have any problem sleeping in our own bed that night — after 10 days and 2,532.8** miles, it turned out to be our best night of sleep yet.

Needless to say, I took a lot of photos on this trip. I’ve compiled them in a slideshow. And maybe, one of these days, I’ll have enough time to go in and add descriptions to all of them. But after reading the post above, you shouldn’t have any problem putting two and two together.

*I called this post Magical Midwest Mystery Tour 2011 since we were never in the same place two days in a row. It got to be a game, me calling home to check in and my parents trying to guess from where I was calling on any given day.

**The Elantra got up to an impressive 40.1 MPG average on this trip. Which made us all the happier that we bought it before this trip.