Last weekend Rich, Coraline, and I were enjoying the wilds of Asheville, N.C. — particularly the wilds of Biltmore. We enjoyed a stay at the historic Firestone house, which Rich found on Airbnb, which was great. Not only was the house in a terrific location with a wonderful host, but the fact that we were in a home environment versus a cramped, impersonal hotel room was really helpful for Coraline. Unlike our trip to Iowa last summer, she didn’t have to sleep in a hotel’s metal prison-on-wheels crib or her pack ‘n’ play. This trip she got to sleep in a big bed like a big girl.

The first night she slept by herself in the twin bed. Of course, I had to lay down with her until she fell asleep, which ended up taking over an hour. She’d only ever slept in a bassinet, pack ‘n’ play, or crib until this trip, so she needed some reassurance. (So did Rich and I — we placed every extra pillow on the floor next to her, just in case.) Our second night there, Rich took the twin bed while Coraline slept in the full-sized bed with me; she fell asleep in under an hour, passed out with her head on my shoulder. The last night, Rich and I switched and Coraline fell asleep even quicker than the night before. 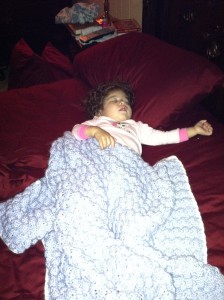 Once we got home last Sunday and Coraline went from a vacation non-routine and 24/7 mommy and poppa time (that included all of us sleeping in the same room together) back to her normal schedule and sleeping alone in her crib in her room, well, it didn’t go over so well. No sooner had I placed her in her crib than she was standing up and screaming “mommmmeeeee” over and over, something she never does at bedtime. She normally flips over onto her stomach, pops her thumb in her mouth, and goes right to sleep. I went downstairs where I told Rich how upset she was and turned on the video monitor, which showed Coraline still standing and screaming. Within a couple of minutes we heard a loud bang, Coraline scream, and Caleb bark. I looked at the video monitor and didn’t see Coraline in her crib; I was pretty sure she wasn’t in one of the corners we can’t see. I told Rich I thought she’d fallen out of her crib. 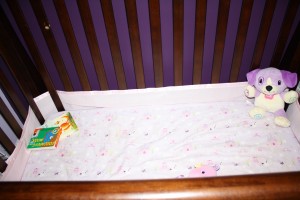 Where's Coraline? (I took this pic back in March when Coraline started squirreling books in her crib.)

We raced upstairs to her room, and no sooner had I opened her door than I spotted her standing on the floor next to her chair. She held out her arms and screamed “MOMMA!” as I snatched her up. Rich and I checked her over to make sure she hadn’t hurt herself; she fell directly onto the hardwood floor, so we were worried about broken limbs and a possible head injury. Thankfully, she was OK. No physical injuries, just scared out of her wits — proof that toddlers are made of rubber and Adamantium. After Rich helped calm her down, I read a few more books to her. While we were reading, Rich brought a mattress pad in and laid it on the floor in front of her crib, just in case. A little while later, I turned off the light and put Coraline back in her crib. This time she rolled over onto her stomach, popped her thumb in her mouth, and went right to sleep.

That was the first — and so far only — time Coraline has ever gotten out of her crib. We think she scared herself so badly that she doesn’t want to try it again. She also scared us so badly that we now have her crib toddler-bed conversion kit in the hallway on standby. 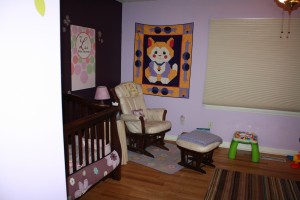 It's a long way down from that crib.