Kings of Leon / “Use Somebody“

Our July 4th weekend was busy. Busy as in our first day back at work today was the coming-down-from-the-weekend-busy. You know — busy. 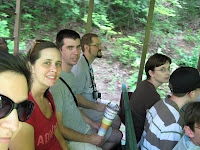 Hooray for Dollywood
Friday we hit Dollywood with our friends Elaine and Dale. We started the day out by taking the train ride around the park, rode the swings, then hit our first water ride for the day, River Rampage. Since we were all pretty soaked at that point, Dale, Elaine, and I rode our next water ride, Slidewinder; Rich took a pass on it to keep an eye on our backpack. Walking around in our soaking-wet clothes after, we hit a couple of roller coasters next, Mystery Mine and Thunderhead. Being the evil people that we are, Rich and I got Elaine on Mystery Mine without letting on how steep the inclines and drops are; she enjoyed it and she and I even rode it again before we left the park for the day. (We made a point to sit on either side of Rich to give him the full effect of the Surround Scream.) Dale had to sit out some rides due to motion sickness, but he enjoyed all the water rides with us (River Battle left us all dripping wet) and the Blazing Fury roller coaster, which now seems like a kiddie ride after Mystery Mine. Rich, Elaine, and I also rode the Tennessee Tornado, which did indeed leave us all a bit dizzy. We had a blast running around the park and riding almost everything, which left us exhausted for the drive home. You can check out some of the Dollywood pics I took here. (Rich — season passes for our Valentine’s Day gift this year? Awesome.) 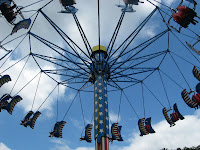 Taking a Swim and a Soak
After a crazy family lunch (more below) Saturday afternoon, that evening Rich and I made our way over to Fran and Don’s house (Elaine’s parents) to enjoy a swim and a soak in their hot tub. Added bonus of soaking in the hot tub? We ended up with a great vantage point for watching 4th of July fireworks. A special bonus for me? Being in the hot tub was also the perfect opportunity for me to bring up this Eddie Murphy SNL skit.

It’s Raining Babies
Last week my brother and his family moved to Knoxville from Puerto Rico. And just like that, Insta-Nephew and Insta-Niece were added to the family (along with Insta-Sis). Ricky Jr. is three-and-a-half years old, while Gabriella is five months old. We met the kids and Maria, our sister-in-law, for the first time at lunch on Saturday afternoon and enjoyed another get-together during Mom and Dad’s Sunday cookout.

Like Elliott and Stepen, Ricky Jr. and Gabriella are also ridiculously cute. I’ll need to grab some of Rich’s photos of Ricky Jr. since the little guy moves at the speed of light. But I got some cute photos of the others, as you can see for yourself. 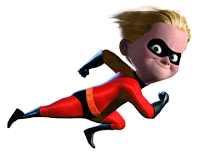 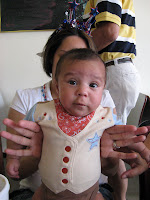 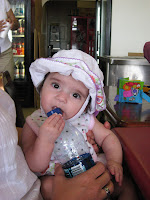 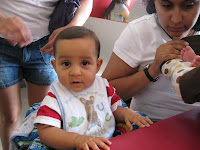 Tagged as friends, kings of leon, use somebody

10:32PM.
I’m finally going on a mini-vacation this week. A much-needed vacation; I’m starting to feel really burned out. And while this vacation is not to the Toronto International Film Festival like I’d hoped to go, it’s a vacation nonetheless, and with a good friend at that. Caren and I are heading to Atlanta to (1) see Mandy Moore in concert, (2) do some damage at IKEA, and (3) blow through Chattanooga on the way home, including seeing Rock City. And, if I can talk her into it and we can find the time, Six Flags Over Georgia. So that’ll be a nice, much-needed break.

As it is, last weekend I went to an amusement park for the first time in almost four years. My sister, Vanessa, wanted to celebrate her birthday by going to Dollywood, so go to Dollywood we did. Tamara and my favorite brother-in-law, Ken, went with us. While Tamara weenied out on a couple of roller coasters, Ken, Vanessa, and I enjoyed getting our asses kicked by the Tennessee Tornado and Mystery Mine. I will go on record as saying that the Mystery Mine is unlike any roller coaster I’ve ever been on. It kicked my ass up and down, and I enjoyed every second of it — both times I rode it.

I’m now on day 19 of the 33 Days of Pattie. I have yet to do anything really memorable, but I’ve been focusing on doing things for me, which has been the whole point. Things have ranged from not having any soda one day (I was caffeine- and sugar-overloaded) to driving somewhere for a solo lunch so I can read my book in peace to playing BioShock for hours on end to singing along OUT LOUD to my iTunes library one night. Of course, Rich wasn’t home, which is why I sang out loud. At least this time Caleb didn’t howl. I also decided to cut a certain someone out of my life (as much as circumstances allow), someone with whom I’d never be friends with had I not met this person when and where I did. I’ll be civil, but I’m not going out of my way to be around this person. Why? Because I decided long, long ago that life is far too short to waste on people I don’t genuinely like, who don’t contribute anything positive to my life. So out they go. And you know what? I feel better already.