I started 2016 with good intentions, including journaling every day. Then tendonitis hit and, boy, did it hit hard. Any form of writing fell by the wayside since I couldn’t even hold a pen or pencil, and typing was pretty much out of the question (I became a hunt-and-peck typist at work). I won’t get into how the voice assist function on my iPad was essentially a traitorous whore, twisting whatever I said into ever more ridiculous words. I did a 31 day blog challenge back in 2012 and figure the first day of a new month is as good a time as any to start another challenge.

I found this list via a Google search, which led me to Pinterest user Madison Clayton‘s page: 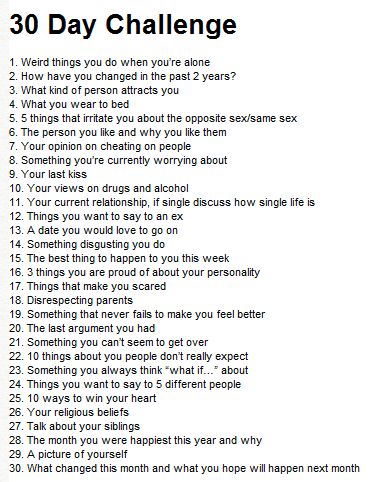 Let’s start, shall we?

Day 1: Weird things you do when you’re alone

It’s not particularly weird, but when Rich and Coraline are both out, the thing I do to take advantage of being alone is listening to music and singing. Out loud. Really loud. I sing LOUDLY without fear of being laughed at, told I “don’t have a singing voice” (Coraline is mean about my singing), or making a dog howl (Mommy misses you, Caleb). Boring and not so weird, I know, but it’s my biggest solo-time indulgence. I may not be able to sing well, but damn if I don’t know the words to countless songs. At least I’ve got that going for me.