I’ve been watching your world from afar / I’ve been trying to be where you are / And I’ve been secretly falling apart, unseen / To me, you’re strange and you’re beautiful / You’d be so perfect with me but you just can’t see / You turn every head but you don’t see me

Aqualung / “Strange & Beautiful (I’ll Put a Spell on You)“

9:13PM.
As I mentioned the other day, I’ve got family and friends close by to keep me company while Rich is away, and they did not disappoint this weekend.

Yesterday, I saw my parents, my sister, Tamara, Elizabeth, Brent, and Benjamin when we all got together for lunch. Our lunch ended up being comped because the restaurant was short a cook and our waitress felt bad enough about our long wait for our food (although we never complained) that she talked to the manager about taking care of our meal. I came home long enough to feed and walk the dogs before heading out for dinner with Mark and Susan at Bonefish Grill (the Bang Bang Shrimp is to die for), a meal which they ended up graciously treating me to. Then the three of us met my sister (the one who couldn’t make lunch) at the movie theater to see The Simpsons Movie (and, yes, it lived up to my 18-years-in-gestation-expectations). Since I covered her ticket, my sister treated me to popcorn and a soda. Two meals and movie concessions, and I got lucky in that I didn’t have to spend any money for any of it. In short, a near-perfect day.

Today Nan and Tamara came over for our Gerry-atric Film Festival. We started by watching some of Gerard Butler‘s TiVoed appearances on Late Night with Conan O’Brien and The Late Late Show with Craig Ferguson. We then watched Dracula 2000, because as Tamara pointed out, he “looks really hot in it”; we followed that up with 300. I’m glad we at least got two whole movies in, since we didn’t get a start until late afternoon. Nan left a few DVDs for me to watch this week, including The Phantom of the Opera, Attila, and Reign of Fire. I’ll be caught up on Gerard’s oeuvre in no time flat. 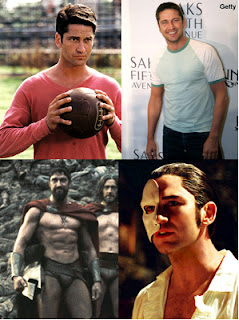 Now I’m just relaxing with the kitties, trying to decide how to spend the rest of my evening. (The dogs are both passed out nearby; Caleb in particular turned on the charm for his Auntie Nan and Auntie Tamara today, so he’s exhausted. Showing off takes a lot out of him.) No surprise, I’m leaning toward watching another movie, although I might go with a chick flick; I watched 13 Going on 30 last night before going to sleep, and am in a sappy, romantic, flight of fancy mood. It’s a pretty good mood to be in.