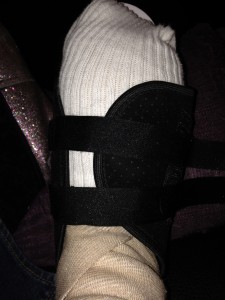 From Bad to Sicker

Waiting for a ride in the dark / The night city grows / Look and see her eyes, they glow

I survived my MRI yesterday without freaking the hell out, which was a very real concern for me. The only other time I’ve ever gotten an MRI was a few years ago to check out my right hip. My feet were tied together to keep my hips aligned, which contributed significantly to the feeling that I was going to suffocate in that sleek, too-narrow metal tube; the technician actually had to remind me repeatedly to just breathe. Which is why I asked my doctor to prescribe something for me this time around. He gave me a benzodiazapine tablet, which was supposed to work as an anti-anxiety med. I took it an hour before my appointment like I was supposed to, but other than feeling a wee bit dizzy, I didn’t feel any more relaxed or prepared to be shoved into that claustrophobic metal coffin. But lo and behold, the pill worked its magic right when it was supposed to (in tandem with a towel over my eyes), and I didn’t freak out during my 17 1/2 minutes of scans. I only know exactly how many minutes because the technician announced how long each scan was going to be: 1, 3, 1, 2 1/2, 5, 2 1/2, 2 minutes. Which made me think of that scene in Clue where they count the bullets.

While I should hear from my doctor in a couple days regarding the MRI results, right now it’s Coraline I have on the brain. After seeming, once again, to start to be on the mend from this awful stomach bug she’s had since Saturday, the diarrhea returned last night and she woke up even sicker today. Rich managed to get her to drink almost four ounces when she woke up, the most she’s drunk in one feeding in days, which she then promptly threw up in her bedroom. And in the kitchen. And in our bedroom. I called the pediatrician’s office again as soon as I dropped her off at my mom’s (I had to be in the office today) and left a message explaining how we’re more concerned than ever about her getting dehyrdrated. The nurse promptly called me back and told me to bring Coraline in again. So I’ll be leaving work early today to do just that. Poor Coraline is beyond miserable at this point, as are Rich and I from worrying about her. Even a couple of days ago, she was still smiling despite being sick. Now she’s almost letharghic and not herself at all. Any healing thoughts you can send her way would be greatly appreciated. 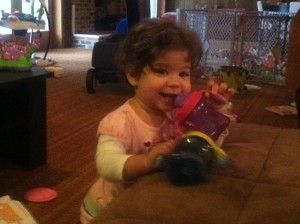 The Barfing Baby and the Brain Scan

Holy cow, it’s been more than two weeks since I last updated. And now it’s mid-November. Holy hell. Anyhoo. So what’s been happening of late? Poor Coraline woke up with a fever Saturday morning, produced some of the worst diarrhea on the face of the earth, and threw up. And that’s been going on since then. Well, the vomiting, anyway. Her fever cleared up by Saturday afternoon, but after she threw up again on Sunday night, we decided it was time to take her to the doctor, especially since our friends put the fear of rotavirus in us. To be fair, we thought Coraline’s symptoms sounded a lot like rotavirus, too, after reading up on it. But the pediatrician put our minds at ease yesterday. Apparently, if it was rotavirus (which Coraline was vaccinated against), the vomiting and diarrhea would essentially be nonstop, which is why so many kids who get it wind up hospitalized because of dehydration. Miss Baby just has a really nasty stomach bug, one that has made her throw up on me not once, not twice, but five times now. That’s in addition to other, non-Mommy-hitting vomit, including waking up covered in it. So it’s been a pretty miserable few days around our house. At least I already had yesterday scheduled as a day off, which made taking her to the doctor that much easier. Sure, it wasn’t the fantasy day off I had planned (house projects completed! laundry done! desk excavated! holiday shopping!), but I was happy to be around and provide some comfort to my sick baby. Even though she was near inconsolable last night. Thankfully, Rich had the magic touch and got her to settle down and finally go to sleep. Now if we could just get her to drink some Pedialyte. Because so far, Coraline is not a fan.

As I write this, Miss Baby is upstairs napping and my mom’s on the way over to sit with her while I walk over to my doctor’s office for an MRI. That’s right, I’m finally getting the ol’ noggin scanned. Those of you who have been reading this blog (hi, everybody!) for the last three years or so know that I’ve had some issues with overheating. As in, I overheat for no apparent reason, including at least two instances where I ended up throwing up (wow — lots of vomit references in today’s post. Sorry about that). I’ve basically lived with it the last three years or so, including unbearably hot summers where my Xterra’s AC wasn’t working. I finally reached my breaking point, though, about three weeks ago. It was a Wednesday when I was working from home, and I had to run out with Coraline on my lunch break. As I was buckling her into her carseat, I started sweating. I was wearing a thin T-shirt and my flimsy, unlined windbreaker. Oh, and it was 45 degrees at the time. I called my doctor later that day to explain why I wanted a physical, including getting my thyroid tested. I mean, it had to be my thyroid, right? Two 24-hour urine sample collections and a lot of bloodwork later, my doctor ruled out the thyroid as well as pheochromocytoma and carcinoid syndrome, which is what the urine tests were for. Which put us back at square one and the scheduling of an MRI. At this point, I’m not sure what I’m more afraid of: the MRI showing something or it not showing something. Fingers crossed that if the MRI does show something, though, that it is at least treatable. Because this overheating — and the extreme, frigid cold I feel when not overheated — is about to drive me crazy. I shouldn’t be sweating when I’m doing next to nothing and when it’s so cold out I should be wearing a heavy coat instead of the thin shirts I can tolerate. Here’s hoping I get some answers soon, whether it’s from this MRI or other, as yet unscheduled and unforeseen medical tests. I’m tired of being a walking medical mystery.