I love that my nephews Elliott (4 months old) and Stephen (coming soon) will take today for granted. To them, President Barack Obama won’t be a big deal. To them, he won’t be our country’s first African-American/black/mixed-race president, he’ll just be our president. And I love that they will get to experience what we all experienced today with wide-open, unjaded eyes. I look forward to telling them how I and all my coworkers had our TVs tuned to the swearing-in, how people cheered out loud, and how some even cried. I can’t wait to describe to them how it felt to see people around the world celebrating with us. I’ll tell them how amazing it was to see more than a million and a half people on the National Mall, all there looking to catch even the briefest glimpse of the new president. And then I’ll explain to them both why it was all such a big deal. 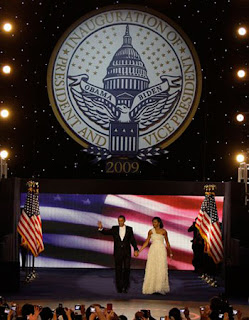 Political Song Lyric of the Day:

Well, since virtually everyone else has weighed in on this year’s election/political insanity (or is that inanity?), I guess I will too tonight in honor of the vice presidential debate (I’ve had fun watching everyone on Twitter). A debate which so far has caused my puppy to grumble in his sleep, me to shake my head over Joe Biden and Sarah Palin’s skills (especially hers) at talking to but not quite answering questions, and my husband to abandon ship and watch a TiVoed movie instead. Biden and Palin? Try Chuck and Larry.

Personally, I have to admit I find it very depressing that politics and religion — two things which, in theory, at least, should be these great, uniting ideologies — do nothing more these days than strain friendships and family ties and force people to choose sides. (I’m a firm believer in the separation of church and state.) This year’s presidential election campaigning has brought out the worst in just about everyone. We’ve resorted to calling each other names, personally attacking people, and then crying foul — and exposing our hypocrisy — when we complain that the other side is doing the same exact thing to us. If you’re a Democrat/liberal, you’re a mindless, bleeding heart baby killer who doesn’t support our military forces. If you’re a Republican/conservative, you’re judgmental, against women’s reproductive rights, and a warmonger. And that’s me politically correcting a mere fraction of the insults I’ve read on blogs, news sites, and, well, just about everywhere online these days.

I say all this as a registered Democrat — and a liberal one at that; I always have been. But I’ll let you in on a dirty little secret: I’ve voted Republican in the past. That’s right — I did something I feel is going the way of the dodo: I voted for a candidate based on (gasp!) where they stood on the political issues of the day and how their stance fell in line with my values and beliefs at the time. Really, that’s what I find most tragic these days: People are deciding on who they’re going to vote for — the person who is going to LEAD OUR COUNTRY — based on the fact that he has a nice smile (so did Hannibal Lechter), he’s a war hero (he’s not the only one), he’s not the other guy (huh?), and she’s a woman (so?) and her Peggy Hill glasses are nice (what the FUCK, people?).

Granted, there’s some comfort in knowing that not everyone decides on who to vote for PRESIDENT (PRESIDENT OF THE UNITED STATES OF AMERICA, people! Not homecoming king!) or other political offices based solely on political party, the image they present, their knack for talking around actually answering questions (I’m looking at Barack Obama and John McCain, too) and that “aw, shucks, I’m just like you,” Joe Six-Pack attitude. So what? What do you think it’s going to take to fix our economy? When/what will bring an end to the war? Should we cut or increase funds for the military? Should minimum wage be increased again, and when? What do you think about our government interfering in women’s reproductive rights? What about your hopes for the education system? Are you for or against tax increases? How do you define marriage? What should we do about illegal immigration? How should we handle foreign relations with hostile countries? And so on and so on …

Think about where YOU stand on the issues most important to you, then take a long, hard look at exactly where your political party’s CANDIDATE stands. If we can all do that and make our decisions based on the truly important things, the things that will ultimately affect us all — not the glossy, tow-the-party-line images presented to us — then we’ll be taking that first baby step toward reclaiming our government as OURS.

Because, in the end, it won’t matter what glasses she wore or that he champions change or that he is a survivor or that he overcame a tragic past. We all need to do our part and make our voting decisions based on who we think can serve our country best. Because if there’s one thing I’ve come to truly believe about politics, it’s that, ultimately, we’re all forced to decide on and choose the lesser of two evils.

*What can I say? Green Day is good for my political posts.