When the going gets tough / And the stomach acids flow

As long as I can remember, I’ve had what was simply called a sensitive stomach. It wasn’t until about five years ago that I officially got the diagnosis of irritable bowel syndrome (IBS). Irritable is an appropriate word for it, since it’s beyond irritating not knowing how something I eat is going to affect me. I can eat a certain meal Monday at lunch and be fine. I can have that exact same meal the next day or two days later and end up feeling like I might die. IBS is pretty much a really awful game of chance, with your stomach as the perpetual loser. I try to manage it — I know any food with high-fructose corn syrup is a huge trigger — but it’s not always easy to do so. I’ve learned to live with it, though. Combined with my wonky taste buds, it’s made me a (frustrated) picky eater out of necessity. I try to avoid trigger foods, but some I refuse to give up. I mean, spaghetti sauce? Yes, it’s acidic, but it’s also delicious and worth whatever I might have to deal with for indulging. I’ll go to my grave a bloated, stomach-cramped pasta-lover.

While I’m used to my IBS-related issues, last summer I noticed I was feeling really horrible pretty much around the clock. I at first thought maybe it was just my IBS being worse than usual, but decided to go see my gastroenterologist just in case. After discussing my symptoms, frequency, etc., my doc decided I should get an upper GI endoscopy. The day of the test came, and my friend Tamara drove me so Rich could get the kids to school and to Mom’s. Come scope time, I passed out as expected and woke up in a recovery room some time later. My doctor stopped by to let me know that I had significant scarring in my esophagus from acid reflux and that I had gastroesophageal reflux disease (GERD). I was validated in that I wasn’t imagining my IBS had run amok, but I was shocked to hear about the scarring as I’d never felt acid reflux symptoms before — no burning, no pain, nothing. That is, until I was put on medication to treat it. I became aware of and felt every instance of acid reflux within days of starting Pantoprazole, and good grief, did it hurt. It took weeks to stabilize to the point where I was no longer feeling that pain. The really fun part is that a side effect of Pantroprazole happens to be the worst of my IBS symptoms. I am now on two additional medications to treat the reflux and GERD, and still trying to avoid trigger foods, although I’m a stress-eater, so lately I haven’t done as well as I should have. I’ve told the spouse on multiple occasions that I was much happier when I didn’t know all this was going on. Ignorance truly was bliss when it was just me and my IBS.

I’m never going to be the ideal IBS/GERD patient. I know that. Honestly, I just don’t have that kind of willpower. (Also: See above remark about stress-eating.) As it is, I’m currently part Samoa as Girl Scout Cookie season just ended and I have my dealer living in my house. My skin even has a nice, faint toasted-coconut scent to it now. I am, however, doing my best to moderate what I eat as well as add a bit more variety. It’s not easy, but it’s something I know I’ll have to work at and keep an eye on the rest of my life. 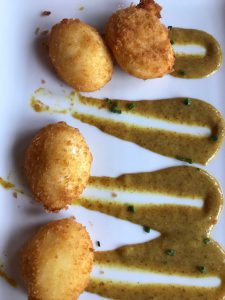 The fried deviled eggs at Scrambled Jake’s: so delicious and something I can only eat as a rare treat. (Photo taken by me)