Tag Archives: stillness is the move

The Dirty Projectors / “Stillness Is the Move“

As you can see, time did not allow for me to update this weekend. Aside from my sister’s birthday lunch, dinner at my in-laws’ house last night, and finally seeing Transformers: Revenge of the Fallen, my spare moments were spent on Operation Bookcases. Long story short: I moved 500+ hardcover books, Rich helped me move the two old empty bookcases, we found takers for them, and I assembled two of the five new bookcases. That’s just for the fiction books in the guest room. We have a lot of books, on every floor of the house. Whenever we move, it’ll just be that much more of a pain.

Anyhoo. Last week I spent the better part of my free time going through the TIFF catalogue and choosing which movies I want to see. I bought the Festival Lite package as well as the Midnight Madness package. The Festival Lite package is for 30 movies (it is a film festival, after all). The MM package guarantees that I get to see the MM showings; I’m told they’re pretty popular and usually sell out, so I didn’t want to miss out. Of course, it wasn’t until after I chose 29 movies total, leaving myself an open ticket, that I received confirmation that, yes, the MM package is in addition to the Festival Lite package, not part of it. Which means now instead of one open ticket waiting for me, I have seven open tickets waiting for me. Provided I don’t go blind or get theater-seat sores on my ass after my first few days at TIFF, I’ll add some more movies to my schedule once I’m in Toronto.

I’m glad to have finally selected my movies and set my schedule, though. The TIFF package that arrived last week weighed 3.6 pounds, the majority of that weight being the 450+-page movie catalogue. Also included in the package was the scheduling book, my Advance Order Booklet, and my drop-off/pick-up vouchers. Behold: 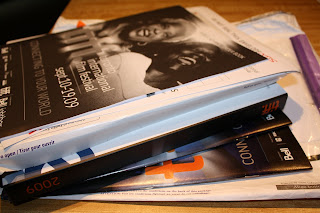 Here’s what made it feel like homework: Filling out the Advance Order Book, which entailed verifying codes, checking that I could make the showtimes, and seeing where on the map theaters are located to figure out the logistics. Good thing my normal walking speed is permanently set to Native New Yorker. Walking a few blocks in a few minutes? Pshaw. I can do that in my sleep. 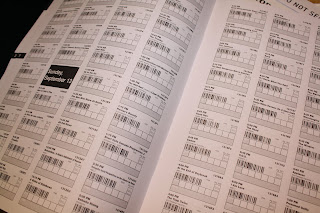 One thing that really made my day was seeing that Colin Farrell, aka my Beautiful Irish Man Whore, is in not one, not two, but three movies premiering at TIFF. Unfortunately, the one I’d like to see most, the late Heath Ledger’s The Imaginarium of Doctor Parnassus, premieres the day after I fly home. Que sera sera. (Dear God: I’ve been a really good girl this year. Please let me at least run into Mr. Farrell in the theater lobby or cross paths with him sometime during the festival. Thanks and Amen, Pattie.) 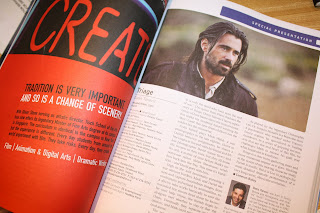 So after much hemming and hawing and list-making, my first-choice movies are:

I only picked second choices for some, not all, to keep my options open. And now that I know how many extra/open tickets I have, I’m glad I did. I also scheduled my movies with some nice gaps in between to allow me time to explore Toronto a bit. Since I’ve never been, I’m looking forward to taking my camera and just walking around the city. Only 10 more days to go …

Tagged as stillness is the move, the dirty projectors, tiff