Through many dangers, toils and snares / We have already come / Twas grace that brought us safe thus far / And grace will lead us home

10:40PM.
I knew Rich’s Grandma Edwards liked me the first day she met me, simply based on the fact that she felt comfortable enough to change outfits in front of me within minutes of meeting me. I’d accompanied Rich to his grandparents’ farm in Iowa to celebrate their 50th wedding anniversary that April 1997. Rich found it very amusing that Grandma Edwards had stripped down to her slip and underwear, chattering away with me the whole time. He later told me that, later that same day, she’d taken him aside and told him I was a keeper.

The last time I saw her was last spring, when Rich and I went to Storm Lake, Iowa, for his cousin Kerry’s wedding. Grandma Edwards had fun showing off her bright blue nail polish; she’d asked the manicurist to make her nails match her wedding outfit, which happened to be bright blue. She was impressed I thought it was cool; seems a few people found it odd that this grandmother had dared to paint her nails blue.

So it was with a broken heart that I accompanied Rich to Iowa on Wednesday. We had gotten the call from his mother, Carol, that Celesta left us Sunday night at 6PM. We like to think that she would’ve loved the fact that we were at a wedding when we heard the news: What better way to hear that this amazing woman’s life had come to an end than when a young couple was starting a new life of their own together?

While the viewing Thursday night was hard, her funeral service yesterday morning was even harder. I don’t think it was harder because we’re all sad that she’s passed away (which, of course, we all are), but it was harder because, hearing about her life and her love of her faith, family, friends, and fun, we were all just so saddened to be reminded of how much love and sheer joy she brought to all our lives.

I’m truly honored to have been embraced by her and to have become a part of her family. Like Rich, Carol, Doug, Kirsten, and too many others to name, I’ll miss her the rest of my life. 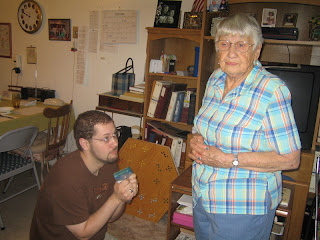