As a child, I dreamed of growing up and becoming a photographer. Specifically, a photographer who got to take pictures of celebrities (how cool would that be?). My dream was inadvertently squashed when a relative said, “You’ll never make any money doing that.” So while I allowed my ambitious 10-year-old lifelong dreams to die a quiet death, I have remained a die-hard amateur photographer ever since.

Now, thanks to my love (read: obsession) for documenting almost everything I see and do, particularly when I travel, that hobby has paid off. Well, not literally. I haven’t earned any money from my photos (next stop: Etsy shop), but I am happy to say that two of the shots I took on my last trip to New York City were selected for inclusion in Schamp New York‘s online city guide. You can check them out on Schmap’s Restaurants – Lower East Side page; just scroll down to Lucien, and my photos will pop up in the right nav bar (click the arrow to see the second shot if they don’t change automatically). How cool is that? Of course, I would never have taken those photos or enjoyed the best French toast of my life if my Aunt Bea and Uncle Louis hadn’t taken me and Rich there for brunch. So a big thanks to them.

As for how I see myself as a photographer, I think my South Park avatar sums it up pretty well: 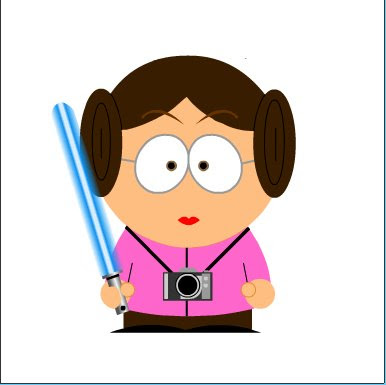 That, and my inherent love of Star Wars (read: childhood dreams of marrying Han Solo).