My Latest TV Obsession: Being Human

In every headline we are reminded / That this is not home for us / Where is it? / Where is home? / I walk a modern tight rope / Of humility and belligerence

It’s been a while since I blogged about anything really TV-specific. Basically because I’ve been, you know, busy. That said, I still find time to indulge in TV whenever possible. I’m not dead, after all. And of late, I have to say my current favorite show — other than True Blood — is that other vampire series, Being Human. The six-episode first season just wrapped up its BBC America run*, but I’m burning it to DVD for a friend, which means I’m using this opportunity to rewatch the season. It’s that good. 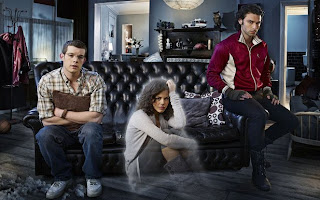 Actually, to describe Being Human as merely a vampire series is completely underselling it. The premise sounds like the setup to a good joke: A vampire, a werewolf, and a ghost share a house in Bristol, England. The meat of the show, so to speak, is that they are all trying to hold onto their humanity in the face of dealing with their supernatural conditions (Being Human — get it?). Mitchell (the distractingly beautiful Aidan Turner), the vampire, does his best not to give in to his primal urges by feeding on humans, a decision over which his fellow vampires give him grief. George (Russell Tovey) has only been a werewolf for two years and still can’t quite get a handle on his changing body. He relies heavily on his roommates, Mitchell in particular, to help him isolate himself during his time of the month, lest he inadvertently hurt someone. Ghost Annie (Lenora Crichlow) went from newly engaged to newly dead. She and her fiance, Owen, shared the house in which her spirit is now trapped. While she supports Mitchell and George, they in turn support Annie in trying to figure out what is keeping her tied to the house and from crossing over.

I think the beauty of the show lies in the friendship between Mitchell, George, and Annie. They fight just like any roommates would, but their unique conditions give them a bond and an understanding like no other. The series has also played with some of the usual vamp/were/ghost conventions, making them its own. Mitchell can go outside in the daytime and be exposed to sunlight. Vampires do not instantaneously die when staked in the heart. Ghosts can be seen by “others” — beings with their own supernatural conditions. They can also touch and move objects like they did when alive. And werewolves apparently have fantastic sex the eve of their metamorphosis (lucky George).

As expected, Being Human has its own wonderfully quirky British sense of humor. While overall the themes are pretty dark and heavy (hiding their true selves, betrayal, power plays, misplaced loyalties, fear, etc.), the show is not without wit. George in particular provides most of the comic relief, with Mitchell getting some really great zingers, and Annie enjoying a slightly more physical humor, with funny lines of her own.

I love everything about this show: the cast, the characters, the acting, the direction, the setting, the look. But in addition to that is an absolutely phenomenal soundtrack, with songs perfectly chosen for each episode, both in tone, sound, composition, and lyrics. In this show’s case, music only makes certain scenes better and more affecting.

Fortunately, season one did so well that season two is now underway, complete with better special effects. And I, for one, can’t wait.

Oh, and did I mention that Aidan Turner is drop-dead beautiful? Rowr. 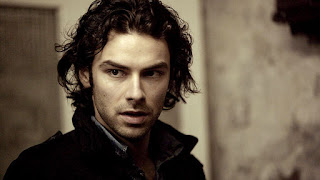 *Check out BBC America On Demand.

2 Responses to My Latest TV Obsession: Being Human