Peaches / “Boys Wanna Be Her“*

8:26PM.
Another day, more movies under my belt. It’s funny — I just spoke with Rich a little while ago, and he said that I’m not updating enough because people keep asking him what’s going on with me. Which I find very flattering, of course — I’m happy people are enjoying reading about my trip. So since tonight is my biggest between-movie gap so far (my next movie is at midnight), let me explain why I haven’t been able to update ye olde blog here that often.

Today was my fifth day here in Toronto. I’ve watched 14 movies so far, including having skipped about three in order to rest my blistered, bleeding feet or nap. That’s right: On my fourth day in, I hit the proverbial wall. So I grabbed a nap and woke up an hour or so later disoriented and unsure what day it was. I made it to Capitalism: A Love Story, but was too tired to hit The Loved Ones at Midnight Madness. I haven’t been to New York City in three years, but this trip has more than fit that particular bill. I have walked miles — yes, miles — since arriving here on Thursday. Movie theaters are several city blocks apart, so I have to factor in the walking time along with the anticipated wait time with regard to when my movies are scheduled to start. For example, tonight I’ll be seeing Bitch Slap at The Ryerson. That’s exactly a five-minute walk from my hotel. So I’ll leave my hotel at about 11:15PM or so to get in line. I’ll sit on the side of the sidewalk, chatting and making new friends like I’ve been doing throughout the festival so far (the native Torontonians and Canadians I’ve met have all been so nice), watching something on my iPod, Twittering, or reading (if there’s enough light). Sometimes I do all those since I’m in line so long. About 10 minutes before the movie is due to start, we’re let into the theater. Seating is on a first-come basis, but as long as you’ve got a ticket you are guaranteed a seat.

I’ve walked so much while here and spent so much time in movie theaters, in fact, that eating has become secondary. My hotel room doesn’t have a fridge or a microwave, so I grab food on my way to or, more often, back from a movie. This whole trip, I’ve had two pop tarts, three small subs, two large slices of pizza (which cumulatively amounted to half a medium pizza), a chicken Caesar wrap, two Twix bars, a few sodas, half a bag of popcorn, chocolate milk, and lots and lots of bottled water. Keep in mind that that’s everything I’ve eaten over the last five days. I honestly think the adrenaline and excitement have stymied my appetite. Shame that feeling won’t last once I get home.

That said, as exhausting as it’s been walking all over this very cool city on my bloody stumps (read: feet), I’m having a BLAST up here. Ten years ago, this kind of trip would’ve been unimaginable for me: I was a happy little hermit with very few friends, who kept to myself; I was incredibly introverted. Like cripplingly introverted — seriously. Now I’m making friends in whatever line I wait or whichever auditorium/theater I watch a movie. I’ve not only reconnected with my high school/college friend, Sanjay (check out his Midnight Madness blogs — the man has had maybe six hours of sleep total so far); our mutual high school friend, Eric; Suzanne from Pennsylvania and John from New York, friends of Sanjay and Eric’s who are now friends of mine, too; and others, including Bill and Leslie; Big Al; Gisele; Huck and Barb; and those whose names I either didn’t get or just can’t remember at this time.

When I go to the Midnight Madness movie, like I will tonight, I get back to my hotel between 2:30AM and 3AM. Depending on how wired I am, I may not fall asleep until about 4AM. Then it’s up at about 10AM if my first movie is at 11AM, and so on. Tomorrow my first movie is at noon, so I’ll probably get up at 11AM and be out the door and on my way to the theater at about 20 to noon since it’s playing at The Ryerson.

I have managed to take tons of photos (shocking, I know), many of which are already on my Flickr page. I’ve also shot lots of video which I will begin posting once I’ve had a chance to watch some of them.

I managed to find out where the celebrities in town for the festival pass their time (i.e., not mingling with us hoi polloi); I’m going to try to venture in that direction over the next couple of days, when I go souvenir shopping. The only times I’ve seen celebrities so far have been when they’re walking the red carpet on the way into a premiere, during Q&A discussions after movies, and on their way out into a waiting car after the movie. That said, I was in the front row for the David Duchovny/Demi Moore movie The Joneses yesterday and managed to get to the stage immediately after the Q&A, where I got Mr. Duchovny’s attention and told him how I enjoyed the movie and what a big fan of his I am. He shook my hand and thanked me. I TOUCHED AGENT MULDER. I honestly thought I might piddle afterwards, I was so giddy having met him. And, yes — he looks absolutely gorgeous up close. I also got within two feet of George Clooney the other day and got photos of Colin Farrell as I passed him on the way into Triage. I also met and got photos with the lovely and gracious Alex Van Sprang and Stefano DiMatteo from George A. Romero’s Survival of the Dead. DiMatteo even teased me and Suzanne with a line from the movie, holding up both his hands and saying, “Five minutes and I change change your lives forever.” And after Daybreakers the other night, Sanjay not only introduced me to and photographed me with the Australian identical-twin directors, Michael and Peter Spierig brothers, but got them to autograph a mini-poster of the movie for me, too. (Thanks again, Sanjay!)

Since I’m not sure when I’ll get to post in this much detail again this trip (I still have eight movies to go), I’ll leave you with a few photos. I’ll do my best to upload the latest batch to Flickr soon.

DISCLAIMER: ALL PHOTOS ARE COPYRIGHTED BY ME. ANY QUESTIONS/REQUESTS, PLEASE E-MAIL ME. THANKS! 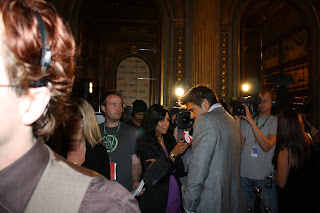 Colin Farrell (taken as I was being pushed past him.) 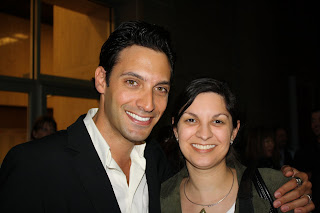 Stefano DiMatteo and yours truly. 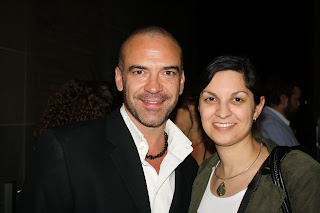 Alex Van Sprang and yours truly. 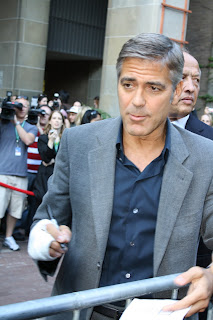 *From the Whip It soundtrack.