This past Saturday I drove Coraline and her cousin Stephen down to Alabama to visit my other sister’s family and for the kids to have some quality cousin time. We started off by meeting Vanessa and her family and a couple of friends at the Huntsville Botanical Garden (which is gorgeous). Elliott almost plotzed himself when he saw Stephen since he thought only Coraline and I were coming to visit. During the drive down, Stephen had even said, “I’m cuzzie’s surprise.” (They call each other cuzzie.) The weather was mild and beautiful, perfect for wandering the Garden’s substantial grounds. If I hadn’t been helping wrangle four kids, I’m sure I could’ve taken even more photos than I did.  Vanessa kept talking about a huge slide she’d seen on their last visit there, so we spent a good deal of time walking the grounds looking for it. After a while I became convinced the slide was like Atlantis, never to be found again. In all our walking looking for it we passed a graveyard full of unmarked graves for all the parents who’d gone before us and perished looking for that damn slide. Maybe we’ll find it next time. Or maybe we’ll just find Atlantis. 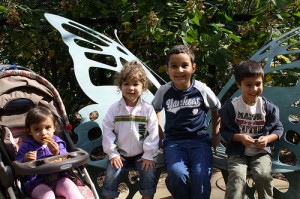 After the Garden we headed to Vanessa’s house where the kids all managed to not nap. Coraline was so tired she passed out around 7:15PM local time (Alabama’s on Central, Tennessee’s on Eastern), slumping over my arm as I read books to her and her little cousin Miranda. I carried her up to the guest room and tucked her in, pleased as punch that bedtime had been so easy. My rejoicing was short-lived, though, because when I checked on her a short while later she was sitting up smiling and said, “Mommy, I have to go potty.” After which she headed back downstairs to play some more with her cousins. Ken inflated a queen-sized air mattress for the kids to sleep on in the living room, Coraline’s first sleepover with both her big cousins. Stephen had slept over in her room at home the night before, her first-ever cousin sleepover. They were so excited about our road trip in the morning that Rich could barely get them to go to sleep. I’m pretty sure he spontaneously self-sterilized that night. 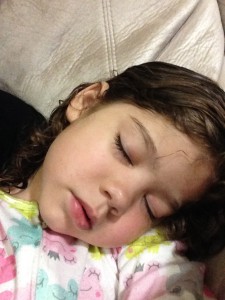 Outwardly Coraline appeared done for the night. But really she was just recharging her batteries to thwart my attempts at getting her to bed at a decent hour (11/2/13). 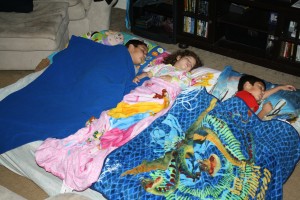 Coraline and I were seriously dragging on Sunday (mostly me, anyway). We’d gained an hour driving down to Alabama, then gained another hour thanks to Daylight Saving Time. I know I certainly felt like it was two hours later than the clock said it was. The fact that all four kids were up and at it by 8AM didn’t help. We stayed close to home that day, with playground time and lunch out our big adventures for the day. Of course, the kids were all about playing together, so it didn’t really matter to them where we went as long as they were together. 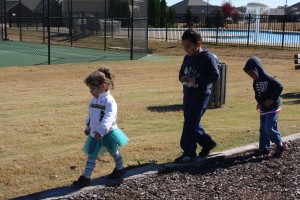 At the playground Sunday (11/3/13). Right after I said it looked like they were acting out a scene from The Breakfast Club, one of the boys punched both fists in the air.

Yesterday Vanessa, Coraline, Stephen, Miranda, and I had a nice breakfast together (Ken was at work and Elliott was at school). We picked up Elliott from school a bit early to give the kids more time together before we had to head home. We set out at 3PM EST so we’d get home around dinnertime. I can’t tell you how many times I had to ask what time it was this past weekend — too many time changes. The drive home was blissfully uneventful, with Coraline and Stephen watching Monsters vs Aliens for the billionth time on the portable DVD player my sister Samantha thought to send with Stephen (Thanks, Sam!). Coraline ended up sleeping for just under two hours, while Stephen stayed awake the whole time, watching Madagascar during the final stretch.

I can’t tell you how happy I was to finally get home. I loved spending time with all my babies, but dear lord, they have a frightening amount of energy. I’m convinced that collectively their energy could provide electricity to a small town via toddler-sized hamster wheels. Also, Coraline is a horrible bed hog who kicked the living shit out of me Sunday night into Monday. As crazy as the kids are when they get together, I look forward to some more weekend-long playdates for them. The best thing about being around them? I never forget to take my birth control pill on time.

One Response to The 3-Day Playdate