A Long-Awaited Date With Santa

Yesterday we took Coraline to visit Santa Claus at the mall. She’s been asking since January to see Santa again as he made quite the impression last December, so it’s been a long year of:

“Is Santa at the mall? Is he there yet?”

“When will Santa be back?”

“When will Santa come back to the mall?”

“Is Santa at the mall again?”

“I’m going to be brave and talk to Santa.”

“I get to go see Santa after Thanksgiving.” 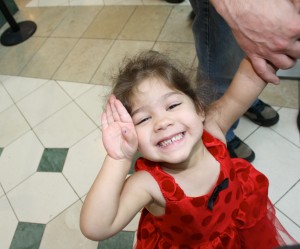 Coraline hamming it up while waiting in line to meet Santa.

Since Cora’s been talking about Santa all year long, Rich and I figured she’d either go through with a solo visit like she’s been saying (“I’m going to be brave!”) or she’d end up choking at the last minute. She did us proud, though. She waved and yelled hi when Santa entered the courtyard and took his seat. Then when it was her turn, she held my hand on the way to Santa’s chair, happily swinging her free arm the whole way. Once in front of him, she smiled and said, “Hi, Santa.” I asked her if she was ready to sit down with him and if she was going to do it by herself. She said yes, I placed her on Santa’s lap, and my brave girl came through. 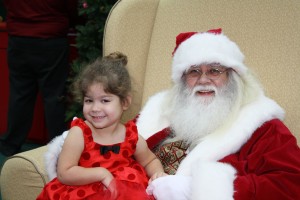 Coraline finally gets her moment with the man in the red suit.

I stayed close by since Rich and I are trying to get gift ideas out of her. Whenever we’ve asked what she was going to ask Santa for, she’d answer, “Christmas presents!” What kind of presents? “Toys!” So she hasn’t been terribly helpful there. Today, though, the first thing she asked for was books — she is her parents’ daughter, after all. When Santa asked which ones, I gently reminded her about the Ladybug Girl series and how she mentioned wanting Dora books. She also asked for princess dolls (there’s a big set at Target she’s got her eye on). The last thing she asked Santa for was “Blocks.” Then a few seconds later: “Legos!” Since Santa realized he wasn’t going to get too many specific requests out of her, he asked if she’d like surprise presents. You can imagine how excited she got at that prospect. 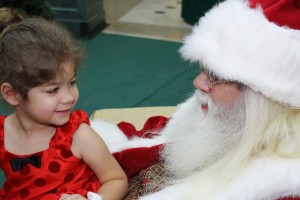 I think she would’ve hung out with Santa all day if it had been possible. She wished him a merry Christmas and we went on our way. Once we were a little ways away from the courtyard, she hollered, “I. SAW. SAN. TA!” 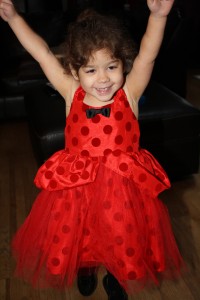 Coraline at home celebrating once again how brave she was when she saw Santa Claus.

I predict it’ll be maybe three days after Christmas before she asks, “When can I see Santa again?”