Done Went and Had a Baby

Like when I close my eyes and don’t even care if anyone sees me dancing / Like I can fly, and don’t even think of touching the ground / Like a heartbeat skip, like an open page / Like a one way trip on an aeroplane / It’s the way that I feel when I’m with you, brand new

I logged in to my blog the other day, trying to remember if my last post was in the spring (I could have sworn it was), only to be shocked to see the last time I posted was the day before Sebastian was born. That’s right – I now have a second kid, Coraline is a (fabulous) big sister, and Rich has his very own Mini Me. My unintentionally long, almost year-long blogging break reminded me of the short-lived show Up All Night, when Will Arnett’s character reminds Christina Applegate’s character that she last updated Facebook the night before their baby was born, and that people probably thought she’d died. As with me, that was happily not the case.

So what have I been up to these last 11 months? The first six weeks after Sebastian was born were all about surviving an ungodly level of exhaustion. There were nights he would wake up after only 20 minutes of catnapping; I can’t rightly call what he was doing sleeping. Why was he up so often? Because we didn’t get really good at nursing until he was about 6 weeks old. Once he started latching correctly each time, he would get nice and full and then he would sleep. It was such a relief to finally get more than 20-minute catnaps. We’d get two-, three-, even four-hour stretches. It was glorious.

In hindsight, I never should have said Coraline was a bad sleeper as a baby, because sweet 6-pound, 8-ounce baby Jesus, Sebastian made his sister look like a fricking sleep Olympian. But we survived. Although at times it felt like I wouldn’t. I had several days where I would cry purely from exhaustion, as well as days I’d cry that it looked like he wasn’t putting on weight no matter how much I nursed him. Once we hit that 6-week mark, though, everything improved across the board. And boy, has breastfeeding this time around been an experience. I’ll try to write more about that another time; I promise it won’t be 11 months from now.

I admit that I was ready to try for a second kid a couple of years ago, but needing the spouse to be on board with that kind of thing is a pretty big deal. And, you know, kind of important. Coraline had of course been lobbying for a sibling for about three years prior to Sebastian being born. Originally she wanted a sister we would name Elsa. Then she decided a brother wouldn’t be so bad. Then she decided one of each would be great. I shot that idea down pretty quickly. She’s a great age to be a big sister, though. She’s been helpful from the get-go, getting me things she knew I’d need (wipes, the Boppy pillow, a burp cloth) before I asked for them. She’s also great with Sebastian and has even been able to soothe him at times when Rich and I couldn’t; it makes me believe that she really can understand his baby talk and interpret what he’s telling her. Sebastian is also pretty fond of her. Watching them interact is one of my life’s greatest joys. They’re also not yet old enough to fight, so I’m enjoying every second of their current peaceful existence.

I hope to get back into updating my blog semi-regularly. I’ve missed it — and writing in general. (My sincere thanks to the one reader who still checks in occasionally.) For now, though, I’m going to call it a night as I haven’t slept more than six hours straight in almost a year. Luckily it’s been for a very good reason. 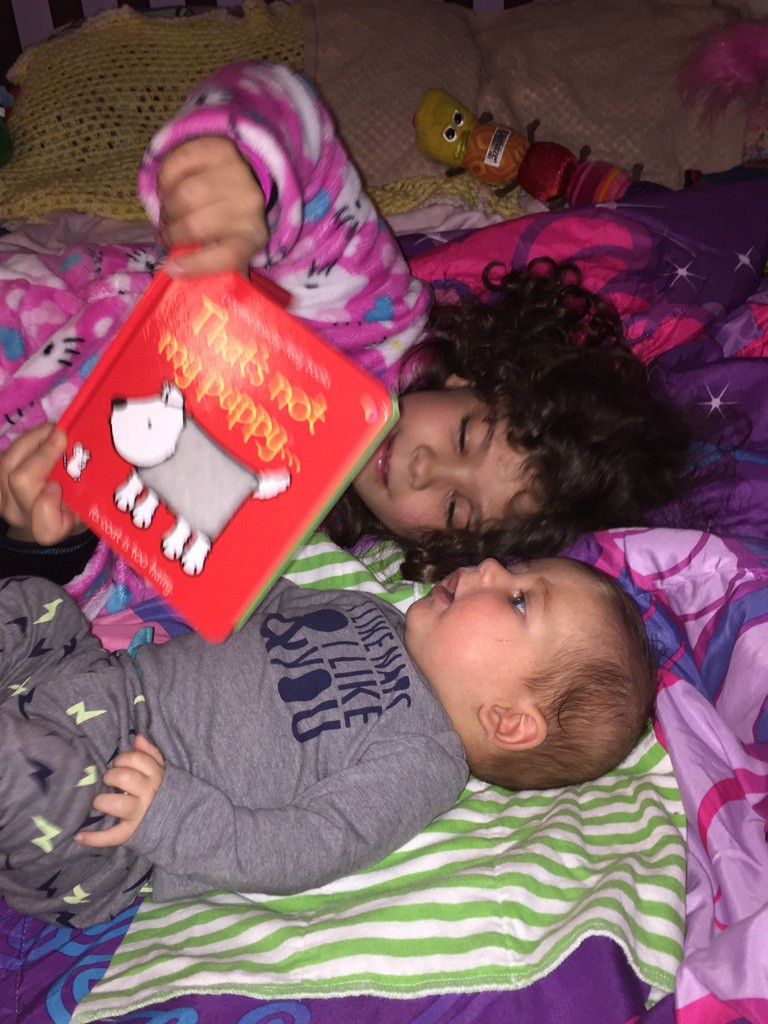 Cora reads to (then 3-month-old) Sebastian

One Response to Done Went and Had a Baby