When It’s Time to Stop Reading

Lately I’ve noticed that while I’ve been reading some of the blogs I’ve read for years, I haven’t been enjoying them like I used to. I originally started reading these particular blogs because they were funny, insightful, poignant, entertaining, and, most importantly to me, relatable. But lately something’s changed –in place of those great, well-written posts I used to enjoy there’s filler. Granted, I think most of us bloggers have occasionally used filler posts just to throw something up there (I’m raising my hand — guilty as charged). But most of us don’t have the type of readership and communities — or, in those rare cases, livelihood — tied to our blogs that these blogs in question do. I know I have a loyal little core of about 30 readers (see what I did there? I subtracted a few). So what’s changed? The majority of posts I’m reading are complete one-eighties from what the blogs used to be about; where one blogger was known for, say, baking, suddenly they’re posting about homing pigeons. I’ve lost my connection to them, that relatability that drew me to them in the first place and kept me a loyal reader for many years. Which is why I’ve come to the realization that I’ve been hate-reading them. (Somewhere my husband just said, “Well, duh.”)

In all honesty, I’ve never been so enamored of any blogger that I idealized them, put them on a pedestal, whatever.  But I did really, truly enjoy their writing for many years. These days? I find that more often than not their posts are about nothing — and not in that funny, clever Seinfeld about-nothing way. Just about nothing, as if they’re going through the motions. Granted, some of them (but not all) have pretty big life issues they’re dealing with these days, but when you’ve made a living/created your blog brand, as it were, based on your brutal honesty and outspokeness and willingness to share personal things, well … it’s quite an adjustment when you clam up and instead post a picture of a homing pigeon. I know there’s plenty of other stuff they could be writing about that would entertain/satisfy their readers (myself included) that wouldn’t even have to touch on subjects they’d rather not be blogging about at this time. And the ones who are closing/deleting/altering comments just because they don’t like dissenting opinions? So much for encouraging honest feedback.

But it’s not up to me to dictate what anyone else can do, you know? Except for Coraline — I’m bossing that kid around until the day I die. Will she listen? Well, that remains to be seen. I do expect some pushback, though.

So what’s my solution to my hate-reading problem? I’m going to stop reading those blogs, cold-turkey. That’s the goal, anyway; after years of lunchtime reading, it’s going to be a hard habit to break. It is going to be an adjustment, though, since I really did enjoy the stories and glimpses into their lives that these bloggers shared over the years. But all good things have to come to an end, right?

In Perfect Tune With The Knoxville Symphony Orchestra

A first-time participant in the Knoxville Symphony Orchestra‘s second Bloggers’ Night last night, Rich and I were both fortunate and thrilled to be in attendance for the KSO’s performance of music by Mozart & Mendelssohn.

Braving a very chilly night, soon after arriving at the Tennessee Theatre and picking our tickets up, I quickly spotted a few of the bloggers I first met a few months ago: LissaKay, her fiance Richard, and Doug (accompanied by his son Noah). After introducing them to Rich, we were introduced to Frank Murphy, who I recognized from his blog. We talked for a while, then Rich and I excused ourselves to take our seats; it turns out we were all seated within close proximity of each other. Doug and Noah sat to my left, while Frank and his wife and LissaKay and Richard were in the row in front of us. Several minutes of theatre-gazing and people watching passed before some orchestra members filed onstage to begin warming up. Naturally, being in the Tennessee Theatre and wanting to document our first time seeing the KSO, I also passed the time taking some photos. 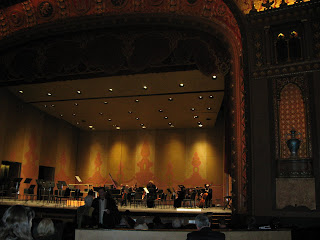 Around 8PM, about a dozen or so orchestra members filed onstage and took their places. Almost immediately, the first strains of Bach’s Brandenburg Concerto No. 3 in G Major filled the air. A classical music fan — in direct contrast to most of the music I typically listen to — I was both awed and humbled. Awed by the precision with which these gifted musicians knew and handled their instruments, and humbled to know that, had I stuck with my clarinet lessons, I, too, may have been a professional musician someday. Not very likely, but still — humbling. I knew Rich was as impressed as I was when he leaned over and whispered “Can you believe they’re making this music?”

The first Concerto came to an end and the musicians filed offstage. Mere minutes later, the entire orchestra filed onstage and took their places to begin performing Mozart’s Concerto No. 24 in C Minor. The conductor, Lucas Richman, welcomed the audience (and us bloggers — “people who blog”) and quickly got down to business. The gifted pianist Navah Perlman accompanied the KSO on Concerto No. 24. I was blown away by how fluidly she played the piano; it seemed almost as if it were a literal extension of herself, another facet to her personality. (And me being me, I also found myself coveting her brilliantly shiny silver pumps.) Of the three pieces the KSO performed last night, I think this Concerto was my favorite. Not only because of the piano accompaniment, but because the piece struck me as a bit haunting, with some dark undercurrents. In it I heard direct influences on some of my favorite modern-day movie scores, particularly The Dark Knight and countless Danny Elfman compositions.

Concerto No. 24 came to an end and a brief intermission followed. While Rich wandered off to stretch his legs, I took some more photos from my seat. After a few minutes, the lights again dimmed and the KSO returned to the stage. The final piece was Mendelssohn’s Symphony No. 4 in A Major. It was another beautiful piece, as flawlessly executed and richly moving as the previous pieces played by the KSO. (But Concerto No. 24 remained my favorite for the evening.)

Rich and I and our fellow bloggers made our way down to a small banquet room for a reception immediately after the concert. We mingled a bit (and I ate more cheese cubes than I should have), enjoying meeting some other locals who share their lives online. I particularly enjoyed meeting and talking to Angie, she of the blog Caroline’s Mom; Katy, a KSO violist and their official blogger; Stephanie (a fellow writer — who got published!) of Jason. For the Love of God (and, yes, we also met Jason); and Beth, a photographer for Knoxville CityView Magazine (a fellow photographer — who makes a living at it!).

I can now honestly say that last night’s KSO concert is by far one of the best experiences I’ve enjoyed on account of simply being a blogger. I thoroughly enjoyed it, as did Rich, and I hope to enjoy a return visit next year — and not just as a blogger.