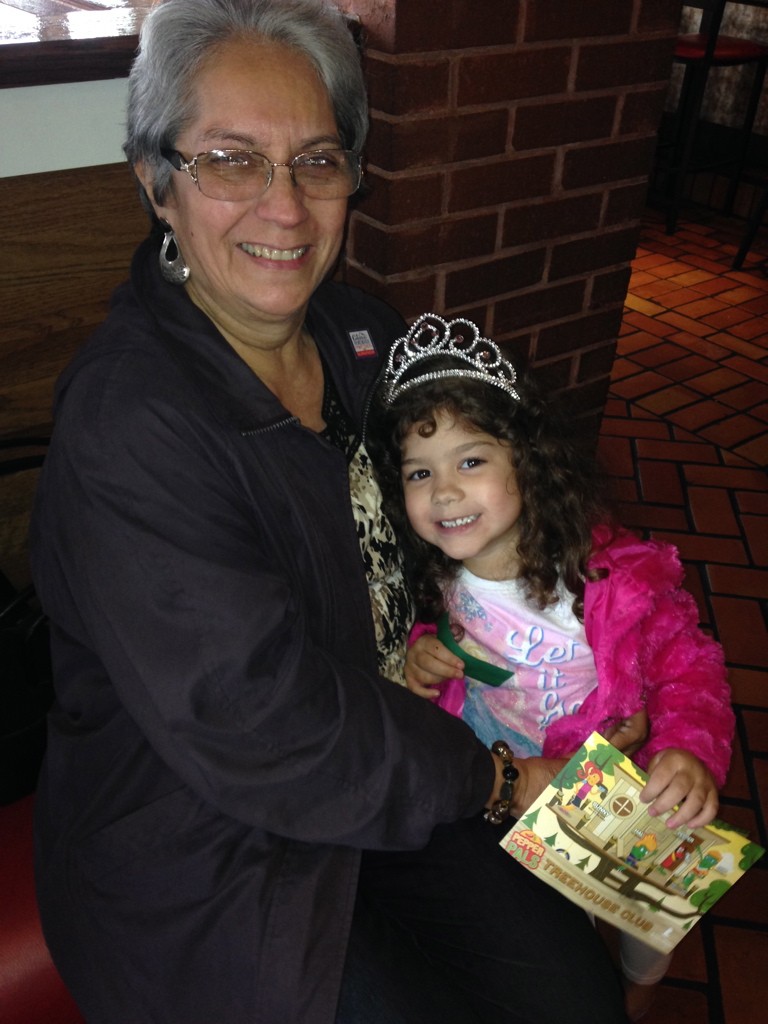 Today would have been my Abuela Tulita’s birthday. She’s been gone far longer now than she was in my life, but I miss her every day. I know she would have loved Coraline’s spunky personality, curly hair, love of all cheeses, and the button nose she inherited from her.
Which is why I am so grateful that Coraline’s own abuela lives a few minutes away and is always happy to spend time with her — and with me.

My grandmother-in-law is being laid to rest this morning in Iowa. Grandma Lee passed away last Thursday after suffering a stroke. And even though she reached the impressive age of 99, I think I took it for granted that she would live forever — she was just so spunky and full of life that it’s hard to imagine that life would ever come to an end.

The last time I saw her was September 2011. It’s really hitting home for me that the last time I saw her was truly the last time I would ever see her. Which is why I’m writing this through yet more tears. But I was lucky enough that my last visit with her was also the first (and only) time she would meet her great-granddaughter Coraline, which was a wonderful thing to behold. Coraline was almost 1 year old and more interested in running around the nursing home than sitting still, but I still managed to get some nice shots of her with Grandma Lee. While Grandma Lee didn’t quite remember me, she did remember her grandson Rich and knew that Coraline was his daughter.

I wish with all my heart I could be there with our family in Iowa to not only say my final farewell to Grandma Lee, who treated me like one of her own grandkids, but to be there to console my husband and father-in-law and our many other relatives as they lay this sweet, incredibly beloved woman to rest. I may be mourning from afar, but I hope everyone there knows I’m with them in spirit.

After our visit to Iowa, Rich’s Aunt Linda sent Coraline the most amazing birthday present, a hardbound book of photos from our visit with Grandma Lee. And while Coraline will never remember on her own meeting her great-grandma, Rich and I will never forget. Day 9: Your most treasured item.

I never really got to know my paternal grandparents. They lived in Puerto Rico, and neither they nor my parents had enough money to make frequent visits a possibility; travel from Houston to P.R. wasn’t cheap. One of the very few memories I have of them involved my parents and their friends getting the bright idea to pick bananas right out of the trees in (I believe) El Yunque National Forest on one of our visits to P.R. You know what I remember about that particular excursion? Sitting in the car after with my abuelo when cockroaches started pouring out of the trunk into the backseat with us. Turns out there were roaches living in those banana bunches. It’s a wonder I don’t flat-out faint at the sight of cockroaches to this day. Or bananas.

My better memory is of my abuela cooking for us (an abuela will never let you go hungry) and swinging in a hammock with my abuelo. That’s it. That’s all I can remember about them on my own. My last visit with both of them was when I was 3 or 4 years old. I saw my abuela again when my dad and I flew to Puerto Rico for Abuelo’s funeral when I was 11 1/2 years old. And on that visit, Abuela Maria gave me a religious medal that she and my abuelo had purchased for me years before. I wore that necklace every day from then on, only taking it off when I visited a beach, pool, or amusement park. I tucked it into my shirt if it didn’t match whatever other jewelry I was wearing (I prefer silver or white gold), slept with it on, and even wore it in the shower. Which is why, one day about 10 years ago, it was sheer luck that I happened to look at the floor of my shower just in time to spot the medal floating toward the drain. In a blind panic, I stepped on it at the last second, preventing it from disappearing down the drain. My mom took it to a jewelry store to repair the broken loop that led to the medal falling off. I stopped wearing it every day.

It now pretty much lives in my jewelry box, but every now and then I pull it out to look at it. It’s literally the only tangible gift I have from my abuela and abuelo, and I feel safer knowing where it is at all times than I do risking wearing it and maybe losing it.  But after tonight, I might just start wearing it while I sleep so I can feel like I have my grandparents with me again. 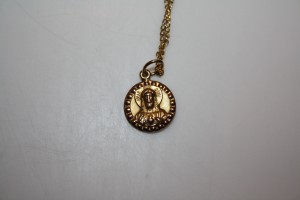 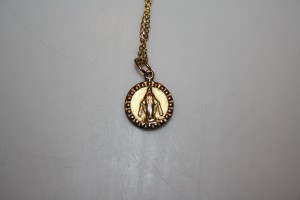 And when I cry for me I cry for you / With tears of holy joy / For all the days you’ve still to come / And did I ever say I’d never play / Or fly toward the sun / Maybe in the meantime, something’s missing

Spacehog / “In the Meantime“

11:45PM.
I’ve been AWOL for a while. As those close to me know, my grandma-in-law has been hospitalized since mid-September. In the time since then, I’ve been an emotional basketcase. While she’s still fighting — and improving (thank God) — on a daily basis, I’ve been dealing with all my emotional baggage over my lost grandparents as a result. So I’ve been crying easily and a lot. (Shower cries really are the best; where better to get all snotty and blotchy faced than the best place to clean up immediately after?)

I’ve been slowly starting to feel better these last few days, so Caren encouraged me to write about it and to go ahead and go live with a few posts I wrote between now and then which, due to my basketcaseness, I’d decided against posting. I even added an email link to my left nav bar after noticing the mailer Rich created for me wasn’t working anymore, for who knows how long.

Despite — or maybe because of — the drama of late, I’ve managed to do the unthinkable: write. I’ve been getting into the habit of working on my book, something I’ve needed to do. And wanted to, only to be stopped dead in my tracks by both my fear of failure and my inner editor, who can be quite the bitch: That paragraph you just wrote? You should really go back and change that first sentence. That’s right — go back, not forward. But really? I want Rich to pony up my Pottery Barn desk.

I’m almost back to normal, I think, because I really, really, really want to catch up on my TiVo queue. The new fall TV season is a bear, so new and old shows alike are stacking up unwatched. I’m just hoping my TiVo can keep up with the demand.

Tagged as in the meantime, spacehog

Joseph Arthur / “In the Sun”

8:47AM.
My grandmother died this morning. Mom called a little while ago and said, “I’m sorry I have to tell you this…” and I knew. Abuela Maria died at 6:39AM this morning. She was in the early stages of Alzheimer’s and was hospitalized with pneumonia. My parents visited her just a few weeks ago, and she no longer recognized my mother. The last time I saw her was summer 2003. I’m grateful that I was able to see her fairly recently, but I keep remembering how we both started crying when we said goodbye, like we knew it would probably be the last time we saw each other. And now I just can’t stop crying.

All I can do is treasure the few, precious memories I have of her and know that at least when I remember her, it’s when she was still able to remember me.

Tagged as in the sun, joseph arthur