On July 13, 2009, I wrote a post about the passing of 35-year-old Staff Sgt. Ryan Means. The story behind what led me to write about — and be so affected by — Ryan’s passing began with another blog post, one I wrote to commemorate the fifth anniversary of 9/11. For it was in that post that I eulogized another young man, Adam Shelby White, who happened to be Ryan’s best friend. It seems only fitting that two of the posts that were so emotionally hard for me to write still resonate years later. Since my posts about Adam and Ryan, I’ve received comments from and exchanged e-mails with Adam’s father, Ryan’s niece, some of Adam’s friends, and, most recently, Ryan’s Aunt Ann and one of his brothers, Tommy. Thanks to the combined graciousness of Tommy and Ann, they’re allowing me to share the beautiful tribute video Tommy made for his brother to memorialize Ryan on Memorial Day 2010. The video begins with Ryan’s burial at Arlington National Cemetery on August 3, 2009. It ends with photos of Ryan with family, friends, and his Army unit, many showcasing his sense of humor (I’m particularly fond of the one with his daughter on the massage table). One of the most poignant photos is the next-to-last one, a black-and-white photo of a young Ryan holding a young Adam on his shoulders.

I knew before clicking on play that the video would be hard for me to watch. And I did cry for Ryan and his family all over again. But I like to think that maybe, in even the tiniest way, his family knows that I (and other strangers throughout the world) share their grief and they’re not alone in remembering this brave young man, husband, father, son, and brother, and that it helps them a little. I know it helps me. 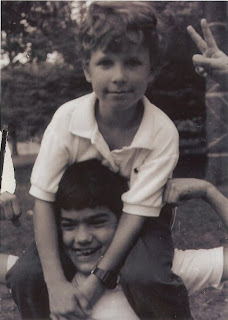 My eternal gratitude to the Means family for sharing their story with me, and for letting me share it with others.

Please stop by the site for Ryan’s daughters, The Sophie and Elizabeth Education Fund.

12:39PM.
After last year’s 9/11 post as part of the 2996 project, I’m going to keep things short and simple this year. Having gone through the emotional wringer last year, I don’t want to do go through that again this year. I watched a bit of news coverage, shed a few tears, participated in a moment of silence. And it’s not because I’m experiencing so-called “9/11 fatigue;” I don’t think I, or most people, can ever forget what happened, nor should we. But while we can never forget, we do have to go on. (To that end, I was heartened to read about how Adam Shelby White’s parents are doing these days.)

While we should never forget everyone lost at the World Trade Center, the Pentagon, and in Pennsylvania that day six years ago, we also need to remember all our soldiers lost since and the veterans who returned — and continue to return — forever changed (watch HBO‘s documentary Alive Day: Home From Iraq) from war. Their sacrifices are merely something else we need to remember not to take for granted.