Come on, ride the train, it’s the Choo Choo train

Knoxville has a short-line passenger train. Did you know this? Because I only discovered this recently. I’ve heard rumors the last couple of years, and then a few weeks ago my friend Meghan and her husband took their babies on the train, the Three Rivers Rambler. Meghan told me about the trip, which I then told Rich about, and we agreed that it would be fun to take Coraline on a train ride.

Coraline has wanted to ride a real train forever. It’s basically one of her lifelong dreams. (Did you know toddlers could have lifelong dreams? They can.) Thanks to my parents, Coraline’s ridden the little train at our local mall enough times to qualify as a part owner, so when we told her about REAL trains, her mind was blown.

Last Sunday, agendaless and looking to enjoy some quality family time, we told Coraline that we were going to take her on a REAL train ride. In typical fashion, she jumped up and down yelling “Yay!” which she manages to draw out like you would not believe. We packed her little backpack with snacks, Rich and I grabbed our cameras, and we headed down to Volunteer Landing to board the train. 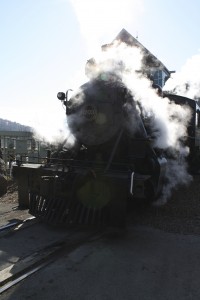 We quickly found seats facing each other, so we had a cozy seating arrangement. The seats also allowed me to keep my gimpy foot elevated during the 2-hour ride. (The website and conductor say 90 minutes, but ours took two hours including a couple of short stops.)

The atmosphere on the train was very friendly, festive thanks to some holiday decorations, and very family friendly — there were tons of families riding with us that day. Coraline loved everything about it, especially the fact that we could walk out onto the following open-air car while the train was moving (it goes really slow). 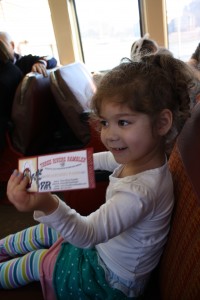 Coraline holds up her train ticket.

I of course took tons of pictures, with Rich handling Coraline-escorting duties; my foot was still pretty tender so hobbling around a(n albeit slowly) moving train with an excited 3-year-old was not on my slate for the day.

I did manage to hobble outside with Rich and Coraline a few times, with the beautiful views totally worth the effort. Not to mention Coraline’s sheer delight at BEING ON A REAL TRAIN. Sorry for the caps, but toddler enthusiasm is contagious. And awesome. 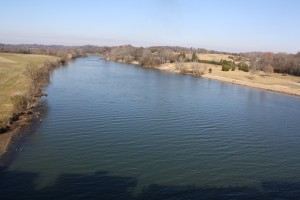 Crossing over the Holston River. Note the train’s shadow on the water.

We heard rumblings throughout the ride that a certain magical jolly fellow was going to be making an appearance. Just when Rich and I had given up hope that the big man would show, there he was. Coraline was giddy waiting for him to make his way back to us (we were in the next-to-last row on the last car). And even though she met Santa outside of the mall, she still told Rich that we needed to go see Santa again at the mall so she could tell him what she wants for Christmas. She is a true believer, after all. 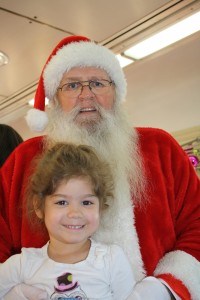 Coraline with Santa Claus on the train, the perfect ending to our first family train ride.