I can see clearly now, the rain is gone / I can see all obstacles in my way / Gone are the dark clouds that had me blind

I’ve had to wear glasses for decades now, since I was a teenager (I’ll be 74 in a few decades). The past few years, if I wasn’t wearing my glasses or contacts, I could only see things within about 8 or 10 inches in front of me. Everything beyond that was a blur if I wasn’t wearing my glasses or lenses. The past few years, I also noticed how quickly my prescriptions were changing. Read: my eyes were getting worse every few months. If I got a new contact lens prescription in January, it would be outdated by April. Ditto new glasses. When vision insurance only covers so much, it gets expensive going to the eye doctor multiple times a year for new prescriptions.

After years of being frustrated by how blind I was without glasses or contacts and my eyes consistently getting worse, I made the big leap and decided to get LASIK, which I’ve thought about doing for years. I’m actually writing this post without glasses on or lenses in, because I don’t need them anymore: I got LASIK last Monday at Woolfson Eye Institute‘s Knoxville office (they also have one in Atlanta). (My work husband recommended Woolfson to me months ago when he got LASIK, and a couple other friends also recommended them via Facebook.)

I was jittery the day of the procedure because it’s a LASER BEAM CUTTING INTO YOUR EYE. The staff was great, explaining everything in detail before the procedure, as well as what post-op care would entail (resting the first couple of days and so. many. eyedrops.). I was actually in the waiting room with a few fellow LASIK candidates and one PRK patient for much longer than I was in the OR, because that’s how much detail they went into with us about what everything entailed. Once it was my turn to go in the OR, everyone put me at ease before I was even in the chair, which was fully reclined so you’re flat on your back. Dr. Woolfson talked me through things as they were happening, from the speculum being placed to hold my eye open (OMG) to what the laser beam was doing to what he was then doing. I started out staring into a laser beam, which I didn’t really feel doing anything to my eye other than slight pressure. It wasn’t until Dr. Woolfson did his part that I felt noticeable pressure, but nothing painful. It was like looking through a frosted lens. He talked me through the part where you briefly lose vision, which I can only describe as experiencing an eclipse inside my eye; the loss of vision lasted not more than 10 seconds, which was a short time, but was still a weird and freaky experience for me. I think the doctor then used a soft brush to smooth out my cornea once he was done; all I could see was a small white object moving across my eye in the same direction a few times. Then it was on to my right eye to repeat the process. At some point during the procedure I noticed a nurse patting my hands, which I had crossed on my stomach. All told, I was in the OR maybe 12 minutes. After surgery, I was given wraparound sunglasses to wear the rest of the day and the two following days to keep my eyes as protected as possible. You don’t realize how much you touch, scratch, or rub your eyes every day until you’re specifically told to stop doing that. I also had clear eye shields to tape over my eyes to sleep in. Other patients weren’t kidding when they said that was one of the worst complications post-LASIK — that surgical tape really hurts when you peel it off the next morning. Feeling like I was losing a layer of skin was the most painful part of all of this.

Post-procedure you’re told to take it easy, including trying to avoid screens and even reading; when you are watching TV, on your computer/phone/tablet, or reading, you blink less. Blinking is good after LASIK as it helps keep your eye lubricated. So I followed their advice and tried napping (with my eye shields on) as soon as I got home. After my sort-of nap I managed to listen to some TV and text quick group messages to my family to let them know how I was doing. I was in hell not being able to read because my book had gotten really good (I highly recommend Abandon by Blake Crouch). By bedtime Monday night, my right eye was driving me crazy, because it felt like something was stuck in it. Of course there wasn’t, but I tend to fixate on things like that, and it felt 100 percent better when I woke up Tuesday morning. I drove myself to my first follow-up last Tuesday morning and was told I’m now at 20/20 vision. I have another follow-up today that I expect to go just as well.

All told, I’m really happy with how my vision turned out. Being able to SEE again is an adjustment in itself. I don’t have to run to the TV now to read the forecast, because I can see it from across the room. Everything isn’t blurry when I wake up in the morning, although I look forward to being told I can rub my eyes again — the Prednisone eyedrops leave a lovely white gunk behind. My biggest adjustment is reminding myself to not reach for eyeglasses that are no longer on my nightstand. They’re now packed away to be donated down the road, because I don’t need them anymore. 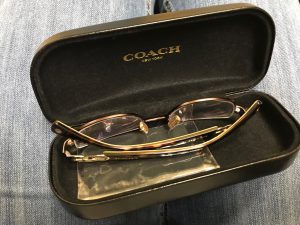 I took this when I put my glasses in the case for the last time, right before I went into the OR.