On Saturday, Coraline and I drove with my dad, her abuelo, down to Alabama so she and I could finally meet Miranda, her new cousin and my new (and first) niece. Cora and I got up at the same time we do on weekdays, got to my parents’ house at 8:30AM, and were on the road by 9AM. Three hours of salsa music later (¡Ay caramba! — it all sounds the same to me. Guess who picked the radio station?), we pulled into Ken and Vanessa’s driveway, where my nephew Elliott ran out shouting, “Auntie Pattie, I missed you!” before hurling himself into my arms. Not too shabby a greeting. Then he hopped into the backseat of my car to say hi to Coraline, who was groggy as she was just waking up from a two-hour nap. We made our way inside, where I finally got to meet and hold Miranda, who is 10 weeks old today. And if I do say so — in my completely unbiased opinion, of course — she’s a little beauty. See? 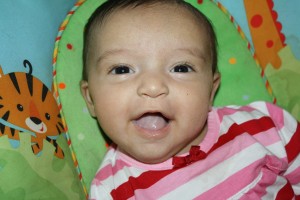 Not only was Coraline giddy to see and hang out with her cousin Elliott, she fell in love with Miranda. Coraline loves babies, and her new cousin was no exception. She kissed her so many times while we were there she reminded me of one of those little glass drinking bird thingies, constantly standing up then bending over to kiss Miranda. 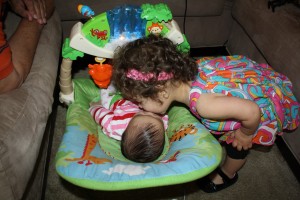 Coraline kisses her new cousin, Miranda, for the hundredth time.

While there, we enjoyed lunch at a Mexican restaurant, a trip to Barnes & Noble where I picked out books from me and Rich to Elliott and Miranda (Elliott’s unexpected selection was Angry Birds Space), and a fruitless-for-me visit to DSW. After hanging out another couple of hours back at their house, it was time for me, Dad, and Coraline to head back home. For the return drive, I selected The Airborne Toxic Event on my iPod, my preemptive strike against more salsa music. We stopped for dinner at a Quiznos, where Coraline wasted time playing with olives and cucumber slices before deigning to eat any of the turkey and cheddar slider I got her. Dad took over driving from there, so it was back to the salsa music. Sigh.

Even though this was just a day trip, it meant a  lot to me, not only because I got to see my sister and her family, who we’ve missed since they moved, but because — believe it or not — this was my first-ever road trip with my dad. And despite having fears of not knowing what to talk about (Dad’s not a chatter), it was actually fun for me and Dad and I did have some nice talks. Coraline won’t remember this trip, but it made a big impression on her: Saturday night was the first night she slept with her little baby doll, who Rich took great care to tuck in under the blanket next to her.