I love decorating our house. The problem is I can’t do a big project, like the whole upstairs living room or the basement, all at one time due to budgetary restrictions (as in we have no decorating budget). So I’ve taken to doing projects bit by bit. I scour the internet — OK, mostly Pinterest — looking for ideas for the rooms/spaces I want to tackle, then I start buying furniture or decor when our budget allows or when there’s a fantastic sale. Et voila: Piecemeal Decorating.

When Coraline decided she wanted her and Sebastian’s bedroom redone in a Star Wars theme, she quickly concluded that their bathroom should match, too. Until now, the hall bathroom the kids use has been known as the Old-Man Bathroom thanks to the walk-in tub in there. My initial half-assed attempt at decorating that bathroom was to hang up the black-and-white ’70s-era shower curtain my mom gave me and a matching zebra-striped bath mat. I remembered the shower curtain fondly from our days in Charlotte, so I was happy to discover Mom still had it. Coraline’s only comment about it at the time was, “Look at that. It’s boobs!” Which pretty much sums it up. And yes, I still have it. I will keep it forever. I mean, look at it. It’s awesome.

As Coraline got a bit older, she gave me input on what she liked or didn’t like for her bathroom. We ended up buying a cute fabric owl-patterned shower curtain from Target and a little zigzag bath rug (also from Target) with colors that matched. We bought a toothbrush holder (one guess as to where it’s from) that says “Brush Your Teeth” in matching colors. And we painted the built-in cabinet a teal blue to match; it also broke up the monotony of the white cabinets against pale tile walls.

When she decided on Star Wars, I asked if she wanted classic or new Star Wars. Being a huge fan of Rey and Finn, you can guess which Star Wars era she chose; I, of course, had been hoping she’d choose classic, but it’s not my bathroom. I then took to the interwebs to find ideas and get her opinions on what I found. I started a Pinterest page for their bathroom on which I pinned a whopping two things. At least the Pinterest board I started for ideas for their bedroom has a lot more pins, thanks in large part to me showing Coraline how to pin things; I’d search for a particular item, and she’d run with it.

The first item we bought for the bathroom was the easiest to agree on: the shower curtain. We found this guy on Amazon.

I — surprisingly — found a lot of Star Wars-themed bath rugs online. I was partial to a Death Star one, but Cora put the kibosh on that. I soon found this BB-8 bath mat at Bed, Bath & Beyond, and she decided that was the one she wanted. 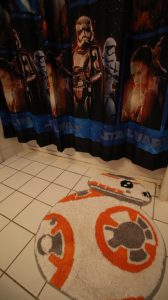 While picking up the rug at Bed, Bath & Beyond, I came across this BB-8 lotion dispenser, which we decided to use as a soap dispenser. It works well with the Creamy Luxe or Nourishing soaps we like at Bath & Body Works, although we can’t use the Exfoliating soaps in this as the micro beads will jam up the pump. 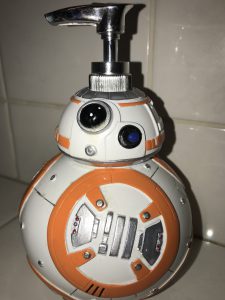 Next we started looking for bath towels. We agreed these towels from Target were cute, were new Star Wars-themed, and matched the shower curtain. We bought two, one for Coraline and one for Sebastian. We also bought a 4-pack of matching washcloths. We also chose this R2-D2 trash can and set it next to the vanity.

Next up were hand towels. Again, so many websites had so many options, but we ended up choosing these BB-8 ones from Kohl’s. 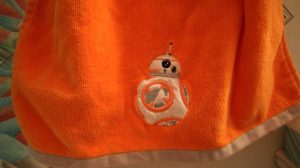 We’re pretty happy with how the bathroom turned out. It’s still not completely done, though — it needs an updated vanity light, but that will have to wait a bit. I won’t get started on how much I want to take down the floor-to-ceiling tile walls and replace them with drywall someday.

Even though I was happy with how the bathroom now looked, I still wanted a little something for the walls. I did a lot of Googling and found a Yoda graphic, which I printed on glossy photo paper and put in an empty IKEA Ribba frame i already had. We happened to have some Command strips in the house, too, which ended up working perfectly for hanging the frame on the tile wall. I also still might buy some cute Star Wars-themed bathroom prints on Etsy — there are so many neat ones to choose from.

All told, it took us a few weeks, maybe between two and three months, to find and agree on everything we ended up buying for the kids’ bathroom. We spent less than $125 total by shopping on sale, taking advantage of free in-store pickups and free shipping, using coupons, and paying with store cards for an extra percentage off items purchased online or in-store.

And now you know how we piecemeal-decorated the kids’ bathroom. Gotta start small, right?

One Reply to “Piecemeal Decorating: The Kids’ Star Wars Bathroom”