A Tree Falls in Knoxville

11:54AM.
If you followed my Twitter stream last night, you already know that we had a hell of a storm going on in Knoxville last night. Of course, if you actually live in Knoxville, all you had to do was look out the window to see a storm the likes of which we haven’t had in a long time. It actually reminded me of my last nor’easter when we lived in Chesapeake. I thought I was prepared: I lit candles and had a flashlight handy since I was positive the power was going to go out (thankfully, it never did). I did the best I could to get the dogs to go out, but didn’t have much luck — nothing new as they’re both scared of storms. I minimized my time on my laptop and TV watching on account of the rock concert-worthy lightning laser show going on outside. I did not, however, wrap a sling around the tree that has been precariously leaning near our driveway for some time now. Which is why when I heard the impressively loud sound of wood splintering right before 11PM last night, I was scared shitless. I went outside to see the damage, but all I could make out in the darkness of the storm was a lot of foliage all of a sudden newly located next to the Xterra.

So I went out to assess the damage first thing this morning. In the light of day, I could see that the entire tree, massive stump and root ball included, had fallen so that it was laying across the top part of our driveway, effectively blocking both vehicles in. Thankfully, neither vehicle nor the garage were damaged since gravity was on our side. The tree’s heavy base missed Rich’s truck by about eight feet, and I now have a lovely, large plant next to the driver’s side of the Xterra. And that’s why I’m working from home today (and about to eat my lunch). 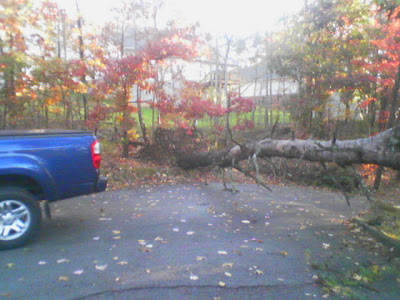 Photo taken with my camera phone since our actual camera is in Chicago with Rich.

Fortunately, my awesome bro-in-law, Ken, has rounded up some coworkers who own chainsaws and large trucks. So he and said Chainsaw Posse will be coming to the house after they get off work this afternoon. They’ll be chopping up what they can and removing as much wood as they can. In return, I’ll be treating them to pizza or Quizno’s subs (the one in South Knoxville now delivers) as a thank you.

You just know this type of headache would have to happen when Rich is out of town on business.