Do Not Taunt Happy Fun Ball.

Coraline has always been a really happy kid. She has a sunny enough disposition that I still sometimes wonder how it is that Rich and I made her. Not that her sunny disposition is a bad thing. Sure, she’s gotten mad here and there, but she’s never been one to stay mad, which is a good thing. Particularly because over the last few months Rich and I have gotten a glimpse of the monster Coraline could potentially be when she hits teenagedom. And it scares the crap out of us.

When she’s really mad, she will yell, “Don’t look at me!” or “Stop watching me!” She’ll even hold her hand up in front of her face to block our view. Maybe she’s mad that we said no about something. Maybe she didn’t nap long enough. Maybe she woke up on the wrong side of her nap. She will also stamp her feet to punctuate exactly how pissed off with us she is. Laser beams shoot out of her eyes if we are unfortunate enough to make eye contact after she’s told us not to look at her. Her head rotates around and she begins speaking in tongues when we try to reason with her. There has also been the occasional threat of projectile pea soup vomit. You get the idea.

Rich and I have taken to referring to Coraline as Happy Fun Ball when she’s in a mood. It’s our primary defense method, a way of warning the one lucky enough to not be on the receiving end of the tantrum to run like hell in the opposite direction. “Happy Fun Ball! HAPPY FUN BALL!” The name seems appropriate because Coraline is all cuddliness and sweetness and light most of the time, but occasionally her inner Sweeney Toddler comes out to scare us.

Thankfully, as I said, Coraline doesn’t stay mad for long. But the mere hint of the teenager she might be is enough to have Rich and I planning on buying a yurt in which we will live in our backyard while she rampages through the house, destroying anything and everything in her path with those laser-beam eyes. 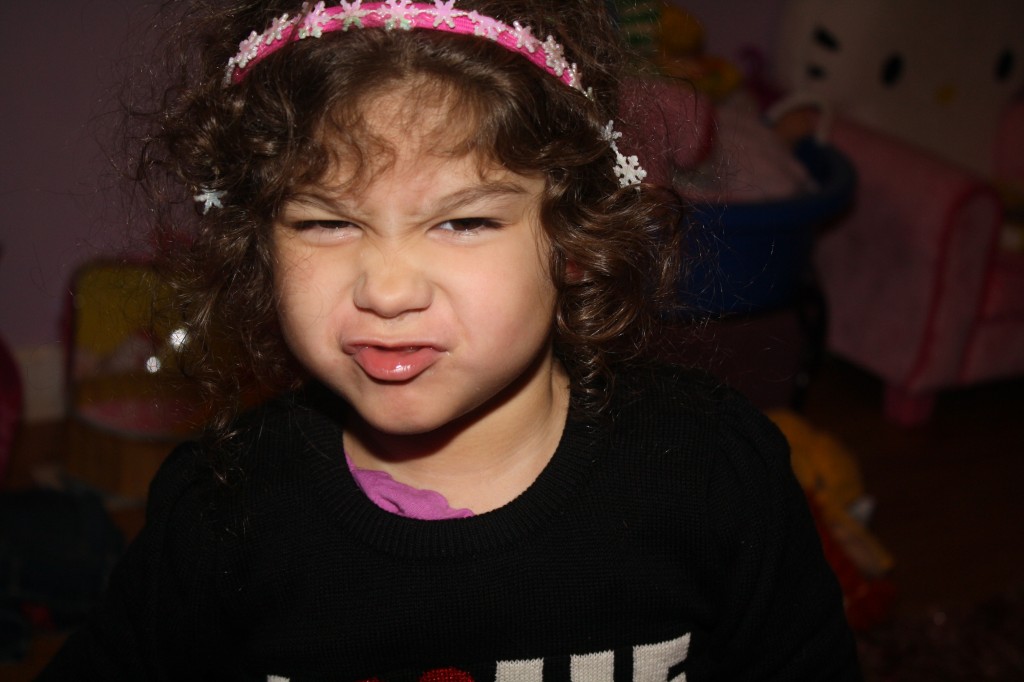