Things That Made Me Smile Today

10:11PM.
I won’t lie — I’ve been in a really bad mood the last few days, ever since unexpectedly running into the worst person I’ve ever known in my life. (I imagine Hell has put out an APB on this individual since surely they’ve noticed by now that such a high-ranking minion is AWOL.)

So here are a few things that made me feel a bit better today.

Catching up on Damages over lunch today (two more eps and I’m up to the finale). Love that show. I don’t care what anyone says — Rose Byrne was the perfect choice to hold her own against Glenn Close. And the twists? Yowza. No one can accuse FX of not knowing what makes for good drama. If only I could find the title sequence online; the images and music really are a perfect fit for the very dark tone of the show. (You can check out the theme song lyrics here.)

Putting the dog costume’s Yoda headpiece on both of the dogs in turn. Hilarity ensued. But now I’m thinking Snoops should be Princess Leia for Halloween. If only her little brother wasn’t such an idiot when in his sage costume. 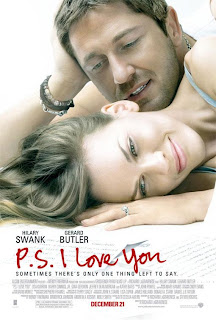 The prettiness that is Gerard Butler. I think all women should have a gander at PhotoShopping themselves into the Hilary Swank position. Carry it around in their wallets just so they can open it up occasionally and look at some happy.

The awesome song and video for “Drivin’ Me Wild” with Common and Lily Allen. One of my current favorites.

Confirming a movie date with my friend to see The Bourne Ultimatum tomorrow night, since we’re both native New Yorkers, fans of the series, and have never seen a Bourne movie on the big screen. Have to go while we still can.

The knowledge that no matter what, Satan’s favorite minion will always be fatter than me.