I’ve been awake for an hour now, having gotten into bed around 3AM after watching the Midnight Madness movie Jennifer’s Body (which is awesome but didn’t even start until about 12:20AM) and then staying for the Q&A with the director, Karyn Kusama; writer Diablo Cody; and stars Megan Fox, Amanda Seyfried, Johnny Simmons, and Adam Brody (who is hilarious in the movie). Here’s a pic, mostly for the spouse to enjoy. And I’m sorry, honey — I couldn’t fulfill your, uh, special request because (1) I couldn’t get anywhere near Megan Fox and (2) really, I just don’t want to be arrested. 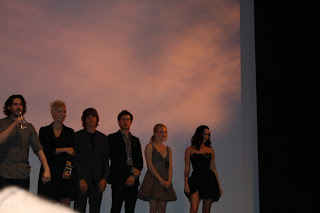 My first movie last night, An Education, turned out to be much better than I’d expected, thanks in large part to Nick Hornby‘s (I was a few feet away from NICK HORNBY! squee!) script, the direction, and the cast, including the scene-stealing Alfred Molina, who had the funniest line in the movie. The movie manages to be an affecting coming-of-age story without being a coming-of-age story, and was a lot funnier than I think any of us anticipated. The fact that it turns out Nick Hornby wrote the script was a wonderful surprise. 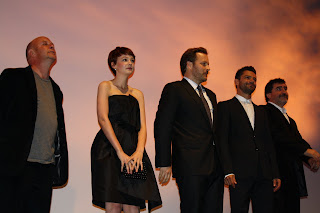 Now if you’ll excuse me, I have to go grab lunch on my way to see Cleanflix.

5PM
Finishing a sandwich before heading to my next movie, Hadewich. After that it’s on to The Trotsky and Daybreakers. My first movie today, the documentary Cleanflix, was wonderful. It was a really fascinating look at the “clean” movie movement, which arose out of a desire to service Utah’s overwhelmingly Mormon population, which is forbidden to watch R-rated movies. The filmmakers, Andrew James and Joshua Ligairi, took a subject that, in the wrong hands, may have come across as boring and preachy, but instead made it into an enlightening, entertaining, and funny movie. It’s the kind of documentary my Aunt Bea, a devout film lover, will devour.

And now I’m off to see Hadewich. Until I can post again, check out my pics I’ve posted so far. Captions and descriptions to come later, but there are enough recognizable faces in them that you’ll figure most of them out.

5:05PM
I almost forgot — I noticed a lot of people have stopped by to read what I wrote about Adam. Along with his friends and family, I’m thinking about him today, too. Much love to you.

The Misfits / “Night of the Living Dead“

As you know, I’m going to the Toronto International Film Festival this September. So I was very excited to see the Midnight Madness movie lineup released earlier today (I got my info via Twitter). Despite my initial disappointment that the rumors about The Descent 2 being the opening movie proved to be just that, I’m happy with the official lineup. What exactly is Midnight Madness about? Until I find out via firsthand experience, I have only my friend’s description and the TIFF‘s definition:

This popular, iconoclastic midnight programme highlights the weird and the wonderful, including thrillers, chillers and rockumentaries from directors who prefer to work in genres not usually seen in a festival context.

Now that the lineup has been released, I think I’m most excited about the opening movie, Jennifer’s Body (check out the red band trailer at Shock Till You Drop). It stars Megan Fox, but I’m excited because it’s (1) a horror comedy and (2) written by Diablo Cody. I’m also looking forward to Daybreakers, primarily because it’s by the makers of the very funny Australian zombie horror comedy Undead. Go rent it now. A man punches a zombie fish in the face! A zombie fish! In the face! How many movies can claim that?

Since [REC] 2 is part of the lineup, I now have to rent [REC]; I enjoyed the American remake, Quarantine, which started out slow and ended up scaring the living shit out of me and my sister. Good times. And to think, I hear the Spanish original is even scarier. I’m also intriguted by George A. Romero’s Survival of the Dead; I’ve seen all of his Dead movies so far, so why would I miss out on seeing the newest one? Last but not least, I’d like to check out The Loved Ones; the director is a newbie and the premise sounds interesting.

The best part about watching all these scary movies? Describing them in detail to the hubby. Because there’s nothing Rich loves more than hearing about horror movies. Well, except not having to watch them.

Tagged as george a. romero, jennifer's body, night of the living dead, rec, the loved ones, the misfits, tiff