They watchin I know this / I’m rockin I’m rolling / I’m holding, I know it / You know it

This weekend was another whirlwind filled with visits with friends, errands, and chores (ah, the life of a grownup/parent/homeowner). Friday night was my off night from working out, and lord did I need that night to just veg. The work week kicked my ass (job security!), and on top of that all my free time, lunch breaks, and evenings were used for errands and meetings. The best thing that happened the whole week was when Coraline sat up for a few seconds Friday night. She didn’t sit up for long, but she sat up, right there on Rich’s office floor. Crawling will be just around the corner now, we’re sure.

Saturday we slept wayyy too late. I won’t say exactly how late but it was after what normal people call lunchtime. We got out the door pretty quickly considering, and ran lots of errands in a very short amount of time. I even managed to squeeze in my regularly scheduled workout once we got home. Then that night it was off to our friends Fran and Don’s house to see them and their daughter, Elaine, and son-in-law, Dale. Coraline had a brief crying jag early on, but it turned out she was just hungry. Once she was fed, she was good. Besides, she loves her Grammy Fran and Grandpa Don, who’ve babysat her a few times already. And she warmed up very quickly to Dale and Elaine, who are expecting their own sweet little girl this summer; Coraline looks forward — as do Rich and I — to meeting the baby currently called Clementine. Of course, later Coraline vomited a copious amount of milk and carrots all over my lap, completely soaking my pants. It sucked, but I was relieved she hadn’t barfed on our hosts. That would’ve been downright rude.

Yesterday we got up at a decent hour and set about doing laundry, mowing the lawn, organizing the garage, cleaning around the house, and generally being good little domestics. We ended the day with a visit from our friends Julie and Keith, for whom Rich recently did a commissioned pastel piece. Which, if you’re a friend of his on Facebook, you saw the progress of; it’s a really beautiful piece, and I’m happy it’s going to a good home. Coraline warmed quickly to Julie and Keith, same as with Elaine and Dale the night before. I’m really enjoying this pre-shy phase of hers. I can only hope when she starts to experience some shyness it’s not too bad (I know, I know).

I’m looking forward to this week since it’s not going to be nearly as busy as last week. Hopefully that’ll translate to nice, quiet evenings spent with my two favorite people. 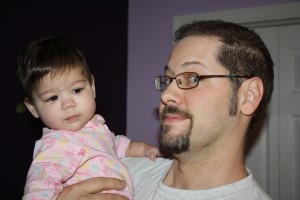