The Son’ll Come Out Tomorrow

Tomorrow, tomorrow I love ya tomorrow / You’re always a day away

Tomorrow is the big day: We finally get to meet Little Dude. I will be 39 weeks and 1 day into my pregnancy when he is delivered via C-section. I ended up having to have a C-section with Coraline because she refused to budge — my water had broken on its own at 9:50AM, and she was still holding on with grappling hooks come midnight. My doctor was worried about infection setting in, so they had to go and get her. This time, though, I have placenta previa, so a natural delivery was not an option. Combine that with my gestational diabetes, and Little Dude gets sprung from the hoosegow about six days early. I would have been fine trying a natural delivery, but I’m OK with having a repeat C-section. I’m all for whatever gets him here safely. Besides, my stubborn little boy is also transverse. Seems he didn’t care for the head-down position, so he’s breach anyway.

Rich and I are as ready as we’re going to be. My last day of work for the year was last Tuesday, and I’ve been in hard-core nesting mode since. Coraline is beyond excited that she will finally not only be a big sister, but that she will get to meet her baby brother instead of having to settle for hugging and kissing my belly. She’s been singing lullabies to him most nights, during which he stretches out and moves in response to her voice. I’m pretty sure he’ll know who she is as soon as he hears her. Coraline has been a little bit more subdued than normal the last two or three days; we think it’s finally hitting her that everything is about to change. She admitted that she’s more happy than sad, though, so that’s good. Tonight Rich and I enjoyed a last family-of-three dinner with her. Tomorrow we look forward to spending time together as a family of four. 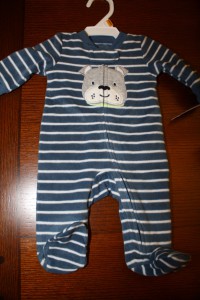 Soon to be filled …