The Chainsmokers featuring Daya / “Don’t Let Me Down“

Over the years as I’ve watched friends add to their families, they’ve all told me basically the same thing: that adding a second child to the mix is more like adding three or four more kids, and that adding a third or even fourth is much easier than when the second was born. I am happy to say that did not turn out to be the case when Sebastian was born. Granted, as I wrote the other day, I felt like I was going to die from exhaustion, but I never felt like we’d taken on too much by having a second kid. I honestly think a lot of that is because of the age difference between Coraline and Sebastian; they’re a little more than six years apart. I think if Coraline had been even a couple of years younger that would have made things feel as chaotic as I’ve had friends describe, because she would have needed me much more than she does now. By the time Sebastian was born last year, Coraline was already little miss independent; she’s quite self-sufficient and great at entertaining herself. She had one jealousy-induced meltdown when Sebastian was around two months old, and so far that’s been it. I think she was just really tired that night — she started whining then crying that her daddy was “playing” with Sebastian and she wanted him to play with her instead. All Rich was doing was holding Sebastian so I could finish making dinner. We’re really lucky — and surprised — that she just had the one jealous episode. So far, anyway.

That’s not to say everything has been sunshine and roses since Sebastian graced us with his presence. He sees sleep as a suggestion, so working around the one good nap he might take during the day is always interesting. He used to scream his way through stores, making running errands even more fun than it already was; I think he was basically playing out his dad’s dream scenario of letting me know how much he didn’t want to tag along on errands. If it were socially acceptable, I promise you there would have been a few instances already where Rich just started yelling in the middle of a store — think Kohl’s during Black Friday shopping. Sebastian was also anti-bottle for the first few months, which meant I could only leave him with Rich, my mom, or another family member or friend for maybe two hours max before I had to get back so I could nurse him.

We’ve all adapted well, though. Rich and I made it clear to Coraline early on that if she ever felt like we were ignoring her because of all the attention her brother needed, particularly early on, that she needed to tell us. We told her sometimes moms and dads are just so tired with a new baby in the house that they may not even realize how they’re behaving due to disruption of the old routine. She’s copped to things being different and missing doing as many things with just me as she used to, but now she and Rich enjoy some new daddy-daughter routines that were born out of me having to nurse and take care of Sebastian. I made a point of having a mommy-daughter day with her on the last day of her fall break this year just so we could enjoy some baby brother-less time together. She admitted that while she loves Sebastian lots, it was nice to have me to herself that day. I need to make a point of doing that more often with her as Sebastian gets older and the tether he has on me continues to lengthen and loosen. That day was good for both of us, for different reasons. 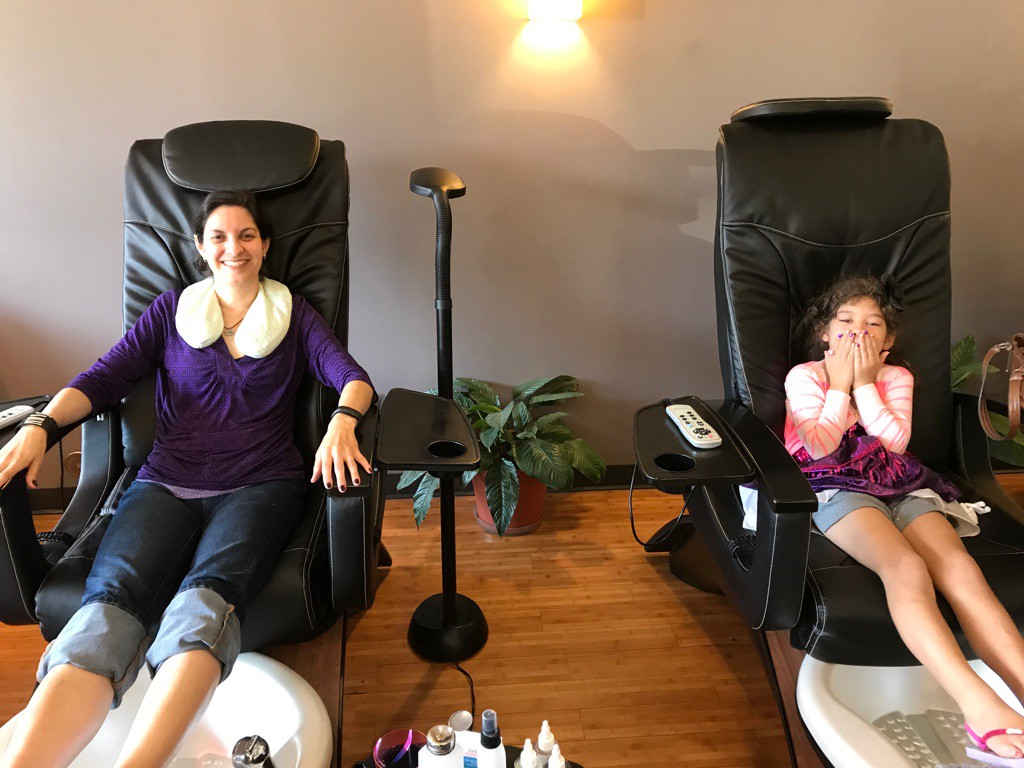 Coraline and I enjoyed our first-ever mani-pedi on our mommy-daughter day.